Mercedes-Benz has named its price for the S 580 e L plug-in hybrid, on sale in the UK now priced £104,490, with first deliveries expected to arrive at the end of the year. Rivals include the BMW 745Le and Audi A8 L TFSI e. 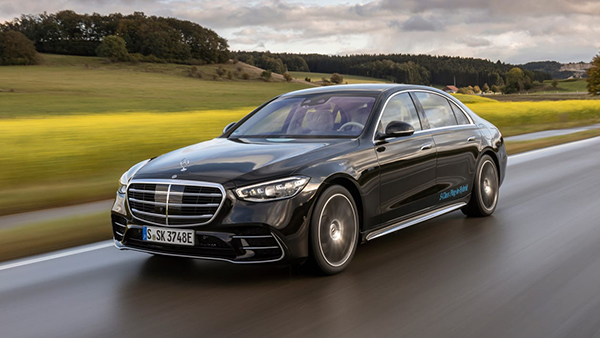 The S 580 e L is the first of two plug-in hybrid versions of the seventh-generation S-Class, and it will soon be followed by an AMG-badged S 73 e variant later this year.

The S 580 e L AMG Line Premium Plus is priced from £109,385. Upgrades include 21-inch AMG alloy wheels and adaptive LED headlights with ultra-range high-beam. The cabin gets a whole host of heating elements for the front and rear door armrests, front centre armrest, steering wheel and windscreen, along with climatised front seats.

Fork out an extra £3,795, and you can upgrade the Premium Plus model with Mercedes’s Executive package. It adds a seven-inch tablet for rear seat passengers, electric sun-blinds for the rear doors and rear window, and a foldable, removable headrest for the front left seat, designed to give chauffeur-driven passengers a better view out of the car.

There’s also an electrically extending footrest for the rear left seat and controls which allow rear occupants to alter the position of the front passenger seat for better legroom.

Every version of the Mercedes S 580 e L is powered by a 362bhp 3.0-litre straight-six petrol engine, which is mated to an 148bhp electric motor and a 28.6kWh battery pack. The engine sends drive to the rear wheels via a nine-speed automatic gearbox.

Mercedes says the system has enough grunt to propel the long-wheelbase S-Class from 0–62mph in 5.2 seconds, before it runs into its electronic top speed limiter at 155mph.

More importantly, the PHEV system has a claimed fuel economy figure of up to 353.1mpg, while CO2 emissions sit as low as 18g/km. On a full charge, the S 580 e L will also cover up to 63 miles on battery power alone.

When connected to a DC rapid charger, the battery pack can take on an 80 percent charge in 20 minutes, while a full recharge using a 7.4kW home wallbox takes around four hours.