Mercedes-Benz S-Class sets the standard for luxury car interiors. It always has, and now that the new 2022 S-Class is out, Mercedes is setting a new bar of excellence to shoot for. 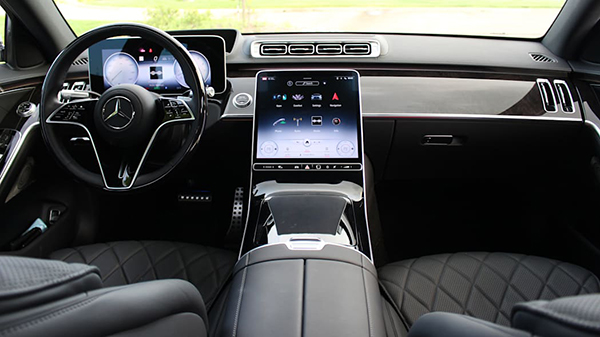 In addition to setting a benchmark for others to aim at, the S-Class has always set the tone at Mercedes for its next wave of models. More often than not, that has included interior design and functionality, and that will certainly be the case this time around: the new C-Class has already proven itself to be a mini version of the S-Class’ new digital-forward interior.

There’s only one way to find out if the new interior is one we want to see copied and pasted onto every other Mercedes, though. For this test, we’re using a semi-responsibly-equipped S 580 — and yes, this V8-engined Mercedes-Benz is one of the few that will still be available for the 2022 model year. 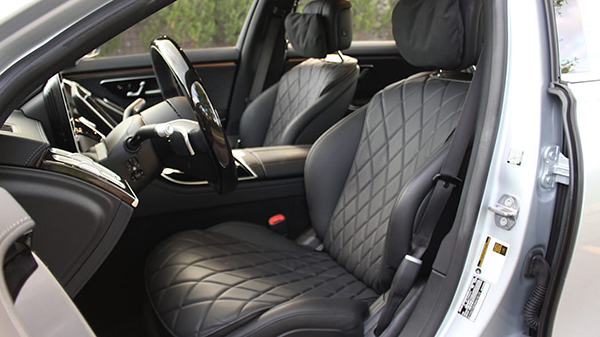 Our test car was fitted with the no-charge Black Nappa Leather interior. It’s perfectly supple and pretty to look at, but you should definitely opt for one of the more interesting colors like Sienna Brown (above left), Carmine Red (above right) or Silver Grey. Since our tester is so sparsely packaged, it didn’t have the $3,800 Warmth and Comfort package. It’s worth every penny if you live in cold climates, as the heated surfaces have shown themselves to be a complete godsend on other Mercedes models. Plus, the package comes with the power-reclining rear seats that are both heated and cooled.

Upon being seated in the S-Class’ comfortable driver’s throne with your head resting on the headrest pillow, it’s immediately apparent that this whole interior is a re-think from Mercedes. The traditional seat controls on the door are now touch operated. Similar to the new E-Class, all of the steering wheel controls are touch-sensitive buttons. And you won’t find any of Mercedes’ perfectly tactile climate controls on the center stack, either. This whole dash is about negative space and touchscreens. Welcome to luxury in 2021. 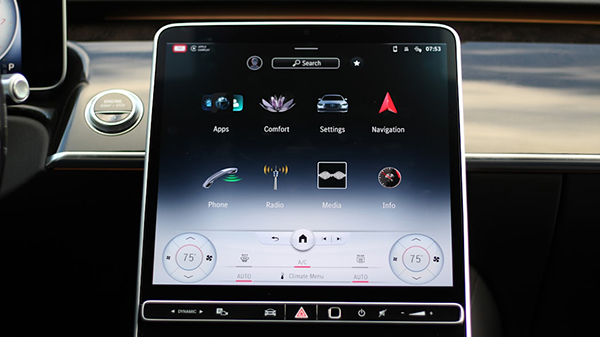 Despite this focus on futuristic controls, Mercedes still throws a few bones to the old-school crowd. The engine start/stop button is a gigantic piece that is rather gorgeous in presentation. All of the vents are still manually controlled (thank goodness) with a nice-to-touch ribbed, metal grip. And other things you touch like the cupholder cover and center console opener are similarly adorned with top-notch touch points. Nothing you run your hand over or move feels cheap or compromised for cost, which is as it should be in an S-Class.

Mercedes keeps things all classically luxurious when it comes to trim options, too. Our test car has the Slate High-Glass Poplar option, but once again, you should spec something far more interesting. The Silver Aluminum/Fanned Walnut combo might be the best, as the giant slab of wood is split into many different pieces by strips of aluminum. Mercedes’ idea of using the trim as this massive, curved design element of the dash is rather dashing in person. It’s simple, but it’s beautiful, too. 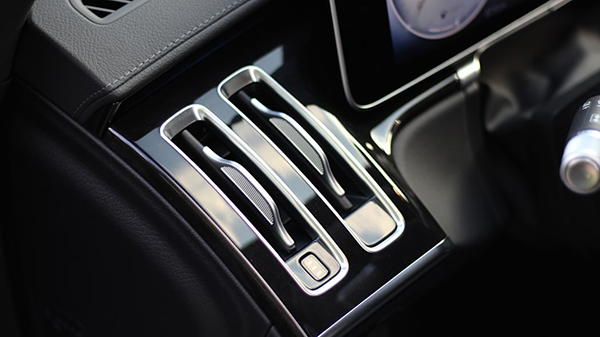 Unfortunately, the whole center tunnel (where the cupholders and wireless phone charger are hiding) is covered in piano black trim. It gets covered in dust and fingerprints instantly, plus the black trim will undoubtedly scratch easily. Considering there’s so much of it concentrated in a prime area, there’s a very good chance this area of the cabin will look a little rough as the months and years go by.

Just like the previous S-Class, this new one takes its job of being isolated from the world seriously. The silence in the cabin can’t be bested by anything that isn’t significantly more expensive. Both road and wind noise are quelled to the point that you can drive around without any music playing and feel perfectly relaxed and at peace — the new 0.22 coefficient of drag doesn’t just help the fuel efficiency but also cabin noise. Less sound pollution also helps the standard Burmester audio system. We didn’t get to compare it to the optional 30-speaker 4D surround system, and while that is very likely a stunning experience, the standard equipment is still going to blow you away. 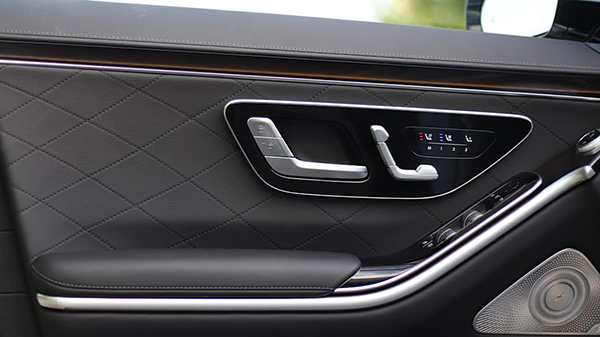 You might be wondering how usable the new touch-based interior controls are. We’re happy to report that the climate controls are not an issue. They’re displayed on the 12.8-inch touchscreen at all times, making quick fan or temperature adjustments a cinch. Do we prefer the perfectly-weighted metal switches from the last S-Class? Absolutely, but the presumed future is just fine, too.

The audio volume controls are already getting on our nerves, though. It’s a two-in-one “button” and slider; you can slide along it either way to adjust the volume, or press the + and – icons. Not ideal. Worse, it resides in the small strip of controls under the touchscreen and is placed as far away from the driver as possible. Jaguar also routinely places its volume control over there, but then that’s a British car company that primarily makes cars for people who drive on that side of the car. Mercedes has no such excuse. The long reach and lack of an easy-to-use knob has us turning to the steering wheel volume controls more often, but even this isn’t perfect. Any volume changes here are also done with a swipe of the thumb on the touch-control steering wheel pad. The control is tuned nicely, but it’s such a huge downgrade from the epic scroll wheel you’d find on Mercedes’ old steering wheel — that was luxury. Adjusting the cruise control is also done via the touch-sensitive slider on the other side of the wheel, and while dialed-in nicely again, it’s still sad in comparison to the old-style controls. 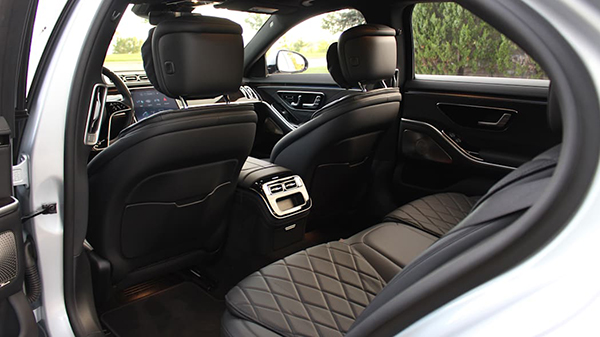 At least Mercedes has only gotten better when it comes to comfort. The massage function in Mercedes’ new seats features both numerous programs for full body movement and motors for vibration. If you’re one who enjoys vibrating chairs or beds, you’ll probably enjoy this, too. If not, you’ll likely just be annoyed by this function.

Just as you’d expect for the backseat, legroom is limousine-like. Our tester didn’t have the full executive rear seat package, but even without that, your passengers are going to love it back there. Similar to the delightful front door panels, the backs also feature Mercedes’ beautiful floating door handle design. 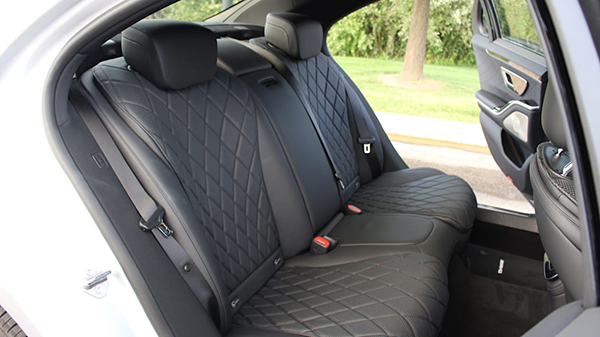 There are certainly some ups and downs when it comes to this new S-Class interior, and some of the downs are things we may grow accustomed to and like more over time. Of course, we could’ve said the exact same thing about every new S-Class since the turn of the century. That’s what happens when you’re a trendsetter: sometimes you hit, sometimes you miss.

This time around, nobody can criticize Mercedes for not taking enough chances with this interior. Neat gizmos like the driver-identifying fingerprint sensor, pioneering interior ambient lighting and endless features/programs found within the infotainment system (which we’ll dive deeply into in a follow-up review) keep the S-Class feeling fresh and on the bleeding edge of tech. That’s just where it should be, and it has us excited to see how this design philosophy translates into the lesser Mercedes-Benz models.