Mercedes just keeps trickling out more and more information about the next-gen S-Class. We’ve already received the full download on its new MBUX infotainment system and 3-D instrument cluster, but today’s info dump is full of even more intriguing details. All of this information is being meted out over time. Mercedes certainly enjoys staying in the spotlight, plus, the S-Class is full of enough new tech that being able to focus on only a few things at a time can make it easier to digest. The car’s full reveal will happen in September, but read on to get a preview of a few key new features. 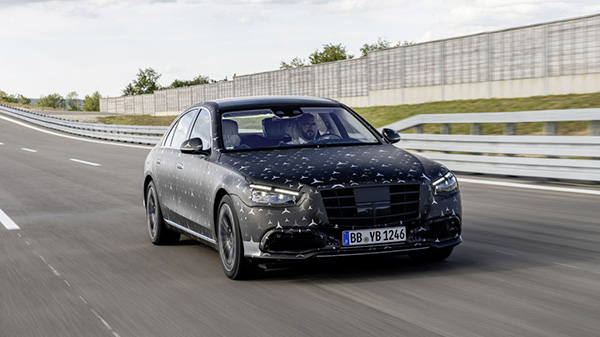 E-Active Body Control
For starters, the new S-Class will adopt Mercedes’ E-Active Body Control suspension as an option. Mechanically, it’s just like the system found on the GLE and GLS crossovers. Due to its status as a road car, though, Mercedes hasn’t tacked on the off-road modes seen in the crossovers. That said, you’ll still be able to enjoy the hilarious Curve mode wherein the vehicle actively leans into corners as you go around them. The biggest advantage is its ability to analyze the driving situation in real time and adapt the suspension accordingly for maximum comfort. Mercedes’ Road Surface Scan (camera at top of windshield) is linked up with the suspension, so that when the camera sees bumps in the road, the spring struts are activated to reduce body movements. The tech worked splendidly in each experience we’ve had so far, and we only expect it to be better with the S-Class. Mercedes engineers told us that it refined the system to better fit the S-Class for its ride and handling characteristics.

In addition to providing greater comfort, the suspension also allows Mercedes to implement something it calls Pre-Safe+. When the side-mounted radar sensors detect an imminent side impact, it instantly raises the body upwards by up to three inches. You may recall seeing this tech in the Audi A8, too. This reduces the loads on the door structures, allowing more of the crash’s force to be absorbed by the stronger door sills. The occupant’s seat bolsters will even attempt to shove you over away from the side of the impact for greater protection. 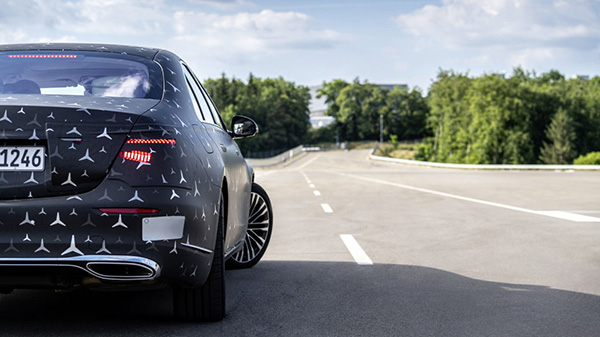 Rear-axle steering
Moving away from safety for a quick minute, Mercedes has also integrated its first rear-axle steering system into the new S-Class. There are two different systems available optionally. One is able to provide a rear steering angle of 4.5 degrees, and the other can go up to 10 degrees. Mercedes says the first is for customers who are more focused on high-speed stability, whereas the second is designed to appeal to those using their S-Class in city environments. Just like most rear-wheel steering systems, there are a couple big benefits here. When traveling at speeds greater than 35 mph, the rear wheels will turn in the same direction as the fronts. At low speeds, the rear wheels turn the opposite direction to make for a smaller turning radius. Mercedes says that the new S-Class is capable of a turning radius (less than 36 feet) identical to that of the tiny A-Class. That’s hugely impressive and should make the S-Class far more livable in small downtown areas and in parking maneuvers.

City-dwelling S-Class owners will also enjoy a smattering of other new or improved features. Mercedes has improved both its Active Parking Assist and its 360-degree camera tech. The car can now recognize more spots to park itself, even going as far as being able to park using the lines on the ground without any cars around. There’s also a new three-dimensional image that can be pulled up in the car’s 360-degree camera mode. It stitches together camera feeds from all around the car to show you a model of your S-Class and the environment around it. The image can be interacted with via touch on screen, letting you move all the way around the vehicle to see your surroundings in context with the vehicle. 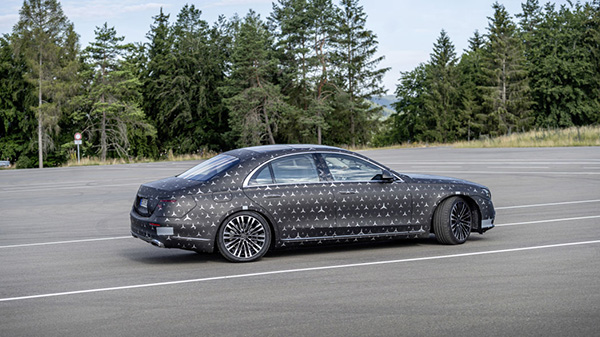 Rear frontal airbag
The last innovation we’ll discuss is Mercedes’ new rear airbag. It’s the first frontal airbag for rear passengers coming to the market, and its design is rather unique. Cylindrical, tubular structures are inflated with gas during the crash, giving shape to a tent-link airbag. The large central part of the airbag is then inflated using the surrounding air “via specially patented valves in the skin,” Mercedes says. These valves let air in, but they’re designed to not let air out once the bag is inflated. Due to this inflation method, the airbag deploys far more gently and with much less force than a traditional airbag does. Mercedes says that it reduces the loads acting on heads and necks in severe frontal collisions. The rear airbags, tucked inside each front seatback, are optional in case you don’t want them. Lastly, Mercedes has integrated a camera into the front seat of the car that can detect if a child seat is fitted in the front passenger seat. It then warns the driver to fasten the child’s seat belt before pulling away.

Look out for the full S-Class reveal in September this year, where Mercedes will surely have many more interesting technology details to share with us.