Numerous spy photos have shown the next-generation 2021 Mercedes-Benz S-Class Sedan, though Mercedes-Benz has kept it well hidden underneath camouflage. That was until a picture of the undisguised car leaked, showing off the new luxury sedan. While the photo was far from perfect – rafters and HVAC plumping obstruct part of the vehicle – it provided a decent look at the new front end and side. That image is the basis for the 2021 S-Class rendering above, giving us our best look yet at the new model. 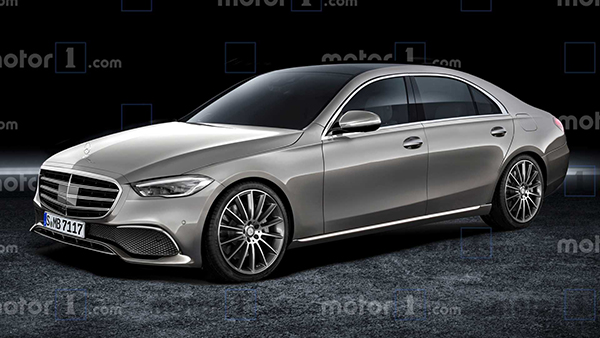 The leaked photo didn’t show a lot of definition along the S-Class’ sides, but our spy photos show some creases in the sheet metal hiding under the camouflage. There’s a subtle crease that runs along the bottom of the doors while another sharper line reaches from the front fender to the rear taillight, just below the greenhouse. Missing from the rendering is the pop-out door handles we’ve spotted on several test mules.

The most significant changes for the 2021 S-Class are at the front where the grille protrudes from the front end. It’s also more upright than what’s on the current-generation model. It’s flanked by new headlights that sweep around the front end. Below is a new, sportier-looking lower fascia. While the overall design update appears subtle, it’s what’s underneath that sets the S-Class apart from others in the segment.

What the rendering doesn’t show is the inside, though we’ve already gotten a peek of that. Mercedes’ digital instrument cluster sits behind the steering wheel while a massive square-ish screen extends up from the center console, eschewing the automaker’s usual infotainment screen located on the dashboard and connected to the instrument display.

The 2021 Mercedes-Benz S-Class will debut before the end of the year before going on sale. The S-Class will receive a fully electric EQS model along with an even more luxurious Maybach version after the regular S-Class debuts.