For true car enthusiasts, there’s few situations quite as chill inducing as pulling up to a venue and realizing that it’s valet parking only. Mercedes-Benz has released a short film that plays on those fears to promote the new S-Class. Specifically, “Valet Guys” is an ad for the new Intelligent Park Pilot function that allows your car to find its own parking space (in properly equipped parking structures).

For most of the two-minute video, a group of guys you wouldn’t even trust your Hertz rental with pull J-turns, donuts and drifts in a bunch of near-classic Benzes. The tire-smoking antics involve cars like the R129 SL, R170 SLK 200, and W202 C43 AMG. They even launch an R107 Mercedes SL into the sky, Dukes of Hazzard-style. It’s actually a pretty entertaining reminder of how 80s and 90s make great pre-CGI stunt vehicles.

It’s also a rare opportunity to see a bunch of non-Mercedes cars featured in a Mercedes ad. A 1969 Mustang coupe, Ferrari 308 GTS and second-gen Subaru Legacy are also on the receiving end of the Valet Guys’ abuse.

Oddly, the video doesn’t really show what Intelligent Park Pilot actually does, which feels like a bit of a fail. It’s much more than the automatic parking system that Lexus introduced on the LS some 15 years ago. Here, you pull the car up to a designated zone in the parking garage, leave the car, and activate the self-parking system on your smartphone. 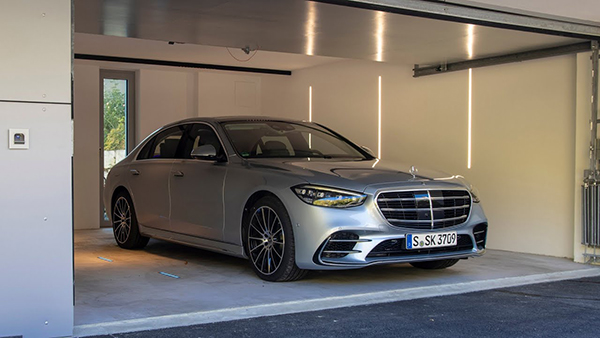 After clicking through a few warnings (Did you leave anything in the car, like belongings or a child?) the car will seek out its own parking spot, reversing, steering, and even stopping for other cars as it navigates the garage on its own. Then, when you’re headed back towards the garage, you can summon the car with your phone so it’s ready and waiting for you in the drop-off/pick-up zone.

Mercedes is quick to disclaim that the system isn’t available for wide roll-out yet, and that the parking structure must be equipped to handle Intelligent Park Pilot. Here’s a video from a German test.