One of the most interesting performance sedans to carry the three-pointed star, the 500E (E500 from 1993) wasn’t actually built by Mercedes. In the early 1990s, the luxury brand was busy with other models, deciding to speed up R&D by teaming up with Porsche. While the body was painted at home in Sindelfingen, the super saloon was assembled in Zuffenhausen. Only 10,479 units were ever made (including the E60 AMG), such as this 1992 example.

Despite being 30 years old, the 500E is still going strong. In a full-throttle run on the Autobahn, the driver used the whole speedometer by lifting the orange needle all the way up to 260 km/h (161.5 mph). In reality, he was doing 250 km/h (155 mph) since the car came from the factory with an electronic top speed limiter.

The mighty V8 engine sounds positively glorious after three decades and delivers enough punch to devour the Autobahn at high speeds. Back in the day, it was rated at 326 horsepower (240 kilowatts), enough for a sprint to 62 mph (100 km/h) in only 6.1 seconds. The 5.0-liter unit enabled the 500E to deliver sports car performance wrapped up in a luxurious and practical package. 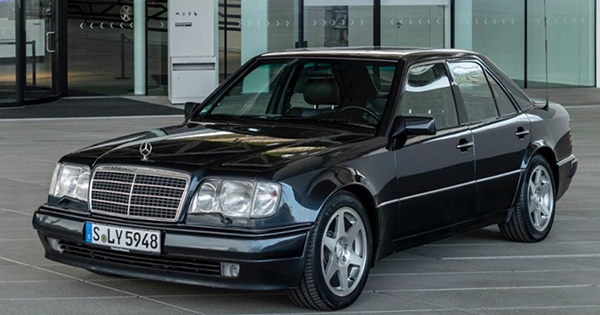 When it first hit the market, it had a starting price more than double that of a regular 300E, so it had to offer impressive performance to justify its hefty premium. The 500E came from an era when Mercedes models were built like tanks, and this 1992 example is a relevant example. Despite its venerable age, the speedy sedan with an engine borrowed from the 500 SL (R129) remains perfectly planted at full tilt.

The 500 E (Einspritzer – German word for “injection”) was offered exclusively with a four-speed automatic (also taken from the roadster) and subtle body tweaks over the lesser versions. Those were different times compared to the current crop of AMGs with their look-at-me big air intakes, quad exhausts, beefy spoilers, and whatnot. The satisfying linear power delivery of a naturally aspirated is hard to match – especially for a good ol’ V8 – even though turbocharging is objectively better by adding power.

As Mercedes prepares to go purely electric by 2030 “where market conditions allow,” this 500E top speed run on the Autobahn is a veritable blast from the past.