There seems to be an influx in appreciation for the W124, one of Mercedes-Benz’s most-loved sedans and arguably their best-engineered product. But today, with the help of Hagerty’s Jason Cammisa, we’re going to revisit the story of one W124 model in particular: the 500E (latterly E500).

This is a car that was engineered by Porsche to defeat the BMW M5 on the Autobahn but ended up becoming much more than just a sports saloon with a big engine: it became one of the finest sedans to ever come out of Germany. And that’s saying something.

When the W124 debuted, it was a revolutionary design, from a time at Mercedes when – as Cammisa so eloquently puts it – the engineers outranked the accountants. It had a drag coefficient of just 0.26, a revolutionary wiper system, solid build quality, and multiple safety features. But Mercedes was facing competition from the East, with Lexus launching their LS400, wiping out nearly a quarter of Merc sales overnight. Added to that, they still needed an answer to the E34 540i and M5 from their Bavarian rivals.

The solution was to put a stonking V8 in the W124. And not just any V8. The M119 was the same basic power plant (minus some turbos) that won the Le Mans 24 Hours under the hood of the Sauber C9. Not only did this eight-cylinder powerhouse prove to be fast and reliable, but it also did better on the dyno after the grueling race than before. 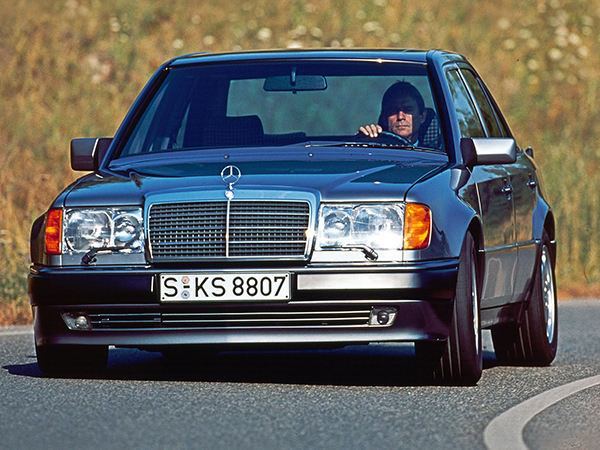 But with the W124’s frame rails too narrow to accommodate a simple shoehorn effort, it was going to require some finessing to get the engine to fit. The problem was, Merc’s engineers were already tied up on figuring out how to defeat the Japanese competition.

Solution: ring up fellow Germans Porsche, and unleash their customer engineering arm. It was the perfect solution, really, as Porsche themselves needed the cash thanks to a massive decline in US sales.

With the frame rails widened, there was another, fatter, problem that reared its head. With an output of 322 hp and 354 lb-ft from the 5.0-liter V8, Mercedes needed to install suspension and brakes from the wider SL. This required those fender flairs that distinguish the 500E from other, lesser W124s. However, now the 500E was too wide to fit down the Mercedes production line. So Porsche was called up again and ended up building the super-sedan. 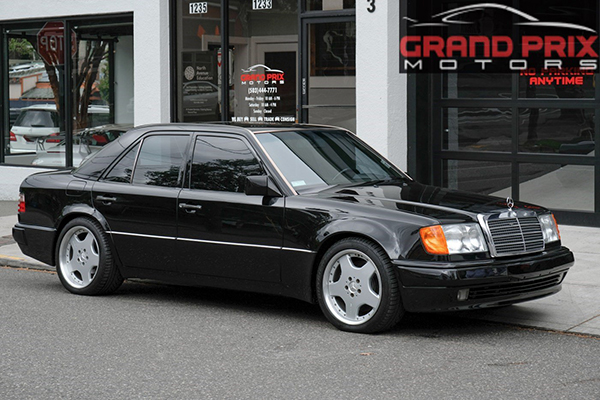 However, Cammisa points out that we shouldn’t go calling this a Mercedes-Porsche collaboration. While Porsche did engineer certain elements of the 500E and provide final assembly, unlike the Audi RS2 Avant, the parts and basic design were all from Mercedes.

It also wasn’t the most efficient means of production. The entire process took 18 days, eons even by the standards of the time. The 300E body would be sent to Porsche for modification, before going back to Mercedes for paint, and then to another different Porsche plant for final assembly, and then one final trip back to the three-pointed start for final inspection and delivery.

It’s one of the many factors why the 500E cost a staggering 35% more than the BMW M5, clocking in at $88,000. But it was a cost that resulted in one of the best sedans ever made. With a 0-60 mph (0-96 km/h) time of just 5.5 seconds, the 500E was supercar fast, even with a four-speed slushbox. Plus, unlike the other big-engine Mercs that preceded it, the 500E handled and stopped like a proper sports sedan. It was a testament to engineering, spurred on by competition and the pursuit to deliver the best – a feat that no other sedan could come close to challenging.