The fuel economy on the E 300 de has always been a focus for our test. It’s the reason you’d opt for the diesel plug-in hybrid Mercedes E-Class, and so far we have seen it average 49mpg excluding the battery running. Not bad, given that I do a fair bit of slower urban stuff as well as motorway miles. Such is the life of a car that is often the support vehicle to photoshoots or a commuter car into central London. 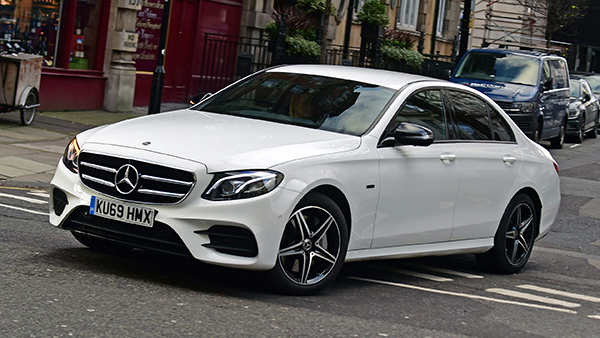 But one of the most interesting aspects of the plug-in E-Class is that you can have a 2.0-litre petrol engine instead of this diesel. The two versions have an identical claimed electric range of 31 miles, and we’ll ignore the official combined economy of 217 vs 188mpg for diesel and petrol respectively. These official figures are fairly useless for gauging real-world economy.

In reality, the disparity is bigger than you might imagine; the petrol E 300 e managed some 20mpg less than the diesel when we tested both. A huge win for our de, then – but it’s not as much as you’d expect, and doing the maths over three years suggests that the lower insurance cost, depreciation and leasing costs of the E 300 e offset a significant chunk of those fuel costs and make a cost comparison over 30,000 miles closer than you’d think.

You can read the complete details in our sister magazine DrivingElectric and on its website, but both cars are fine company, and the lesson is that you must plug them in regularly to benefit from the tech.

Mind you, the electric motor does make these plush executives rapid. Both of them will do 0-62mph in less than six seconds and have more than 300bhp, so there’s no great surprise that I’ve been getting a few issues with traction in our de. 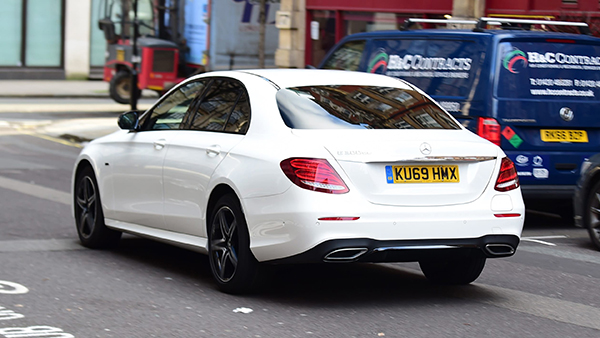 It’s nothing unexpected given the soggy weather we’ve had, but enough to make you think twice before pulling out sharply since you have to factor in a bit of wheelspin fun.

Go for a rapid getaway in electric mode and the E-Class can also have the odd big hesitation as it decides whether to fire up the diesel engine. This has only happened a handful of times but can be a tad alarming.

Other than that, I have to say that our E-Class is just a delight. I’ve connected the ‘Mercedes me’ app, which I’m enjoying because it makes it easier to adjust the climate pre-set and get the car toasty before I set off in the morning. To me this feels like the ultimate luxury in the misery of winter. 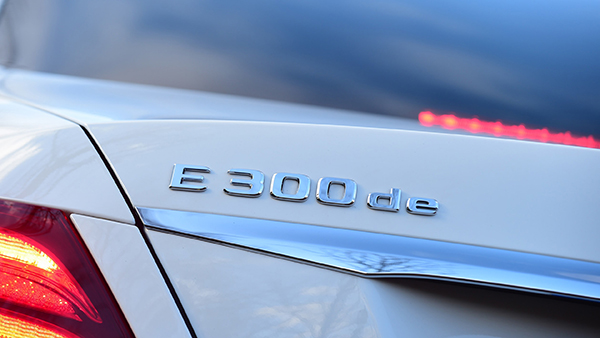 I can even set the dial design and ambient lighting from my phone; more importantly the app has been great at connecting to the car and updating me on the charging state. But not having basic timed charging – a ‘charge in these hours’ option – is a huge oversight. I have a cheap off-peak tariff, but don’t want to faff about with a cable at midnight, so being able to plug in when I get home but delay the charge is critical.

Still, even when it’s not pre-heated, the interior in the E-Class is a huge selling point. The single-piece screen, the heavily bolstered seats, the classy analogue clock, the general lustre and feel of the cabin – all that characterises the car far more than its powertrain and, I suspect, is why you’d go for the Mercedes over its rivals. I just love it, especially with the 64-colour ambient lighting that can also subtly cycle through the colours, which I find oddly pleasing – mostly because my three-year-old daughter thinks it’s the best thing in any car, ever.

With time I’ve become very familiar with the car’s infotainment system, too, and now use the small touch-sensitive pads on the steering wheel for almost everything. I’m also generally a fan of a rotary wheel on the centre console, so I still use that sometimes, but these pads let you control the system without taking your hands off the wheel.

All-in, it’s a heady, lavish-feeling car with a stupid turn of pace if you want it – all the more impressive given that it also routinely does 75mpg over my 60-mile round trip into London if I start with a full battery.

Looked at like that, our diesel Mercedes PHEV really does appeal to the head and the heart. I’m looking forward to seeing how the warmer weather improves that electric range and overall efficiency still further. 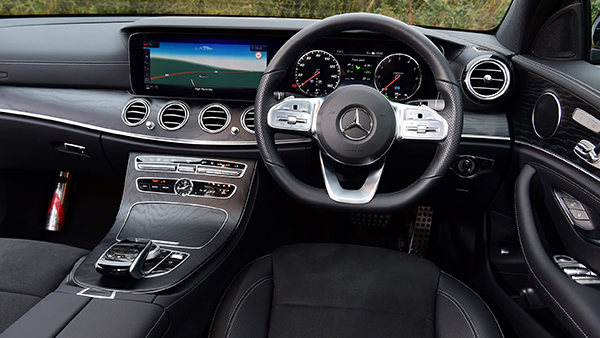 Mercedes E 300 de: second report
I drove our Mercedes E 300 de from London to Dublin and back recently. The trip took in everything from long motorway runs to short suburban trips around Dublin, and even an excursion to the Wicklow countryside along winding rural roads.

Temperatures remained in single figures throughout, so the dashboard never promised more than about 20 miles of pure-electric running from a full battery – some way off the official claim of 30-plus miles.

That’s nothing unusual for a plug-in hybrid in cold weather, but I was a little disappointed with the economy as well. Running the car primarily in Hybrid mode, charging from a domestic socket and occasionally using the engine charge function saw economy of 43mpg from a tank of fuel.

Our Merc’s chief proprietor, Vicky Parrott, is getting 48mpg even with a lot of routine, non-electric motorway miles, so maybe I just have a heavy right foot.

I was disappointed to find that the hybrid battery created a large box-shaped intrusion in the boot. You’ll struggle to get a large suitcase in, and with no dedicated cable storage, you lose even more space to the hefty cables. They’re so awkward to pack into their cases that they end up loose in the boot most of the time.

Still, my overall impression of the E 300 de EQ Power over a fortnight’s use is a positive one, but that compromised boot means it’s probably not a car for buyers with young families. It also served as a regular reminder that the quoted fuel-economy figures for plug-in hybrids should be viewed as ‘ideal maximums’, with the real day-to-day figures only likely to be around half as good. 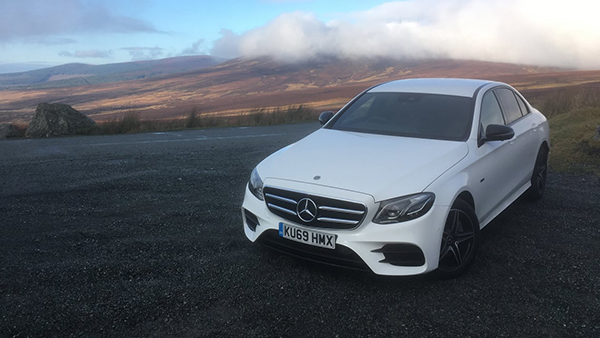 I wish there were more cars like the Mercedes E 300 de. After all, a diesel plug-in hybrid offers all the cleaner, tax-busting benefits of pure-electric power for short journeys and inner-city hops, plus diesel economy when you hit the motorway.

We hardly need to revisit the bad press diesel power has received in the past few years, nor highlight the declining sales it is suffering in light of legislation now clearly favouring petrol and electric cars for both private and company buyers.

Yet this is why I’m so excited to be running the E 300 de for the next six months; it offers a chance to really test its real-world efficiency and find out for sure if this is a powertrain combination to advocate and encourage. 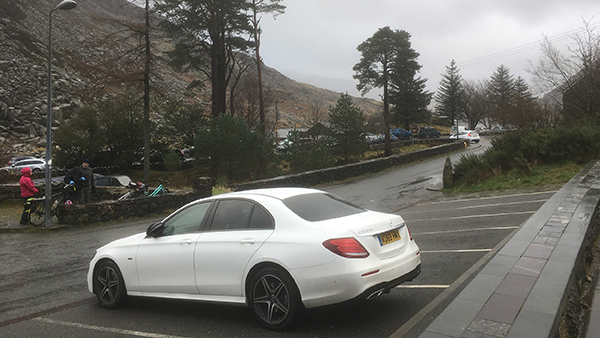 An official claimed range of 32 miles is one thing, but I want to know how far the 13.5kWh battery will take it on electric power alone in cold and warm weather, and how economical the 2.0-litre diesel is thereafter. What sort of economy you get if you plug in regularly and leave the car in default hybrid mode is another avenue I want to investigate.

I have the ideal commute for testing the Merc’s efficiency, because I cover 30 miles each way, 70 per cent on the motorway and the rest in crawling London traffic. I also already have a home wallbox charger, which means I can easily take advantage of the Merc’s charging rate of 7.2kW. That means it will fully top up in well under two hours from my standard home charger; half the time it will take most other plug-in hybrids, including the petrol-electric BMW 530e.

So far, I’m only getting around 20 miles of pure-electric power and 43mpg, but our car had barely any miles on it at delivery and it’s only reasonable to expect a bit of running-in to get the best from it.

We’re also looking at a £50k exec saloon, and with that price and prestige there are seriously high expectations for refinement. So far I’ve found the E 300 de is more than quiet enough, but I’m keen to go a bit further and find out how it matches up to the petrol E-Class plug-in hybrid on this front. It’s interesting that Mercedes offers the option of a petrol or diesel engine in its plug-in hybrid E-Class range, so we’ll soon get them together and find out how they compare. 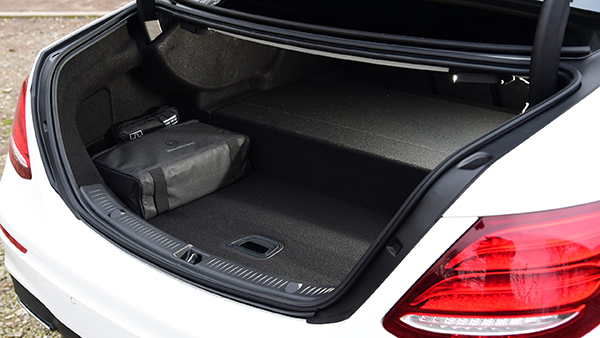 Our car comes in the sportier-looking AMG Line trim, although even with the optional £595 Night package fitted, it retains the 18-inch alloys that the base SE trim gets – just in the trademark Mercedes five-spoke alloy design. The pack also adds gloss black grille and exterior trim highlights, which look great, contrasting with the white paint

The only other option on our E-Class is the £2,395 Premium pack, which adds a memory function to the standard electric seats, and most notably the ‘Intelligent’ LED lights. I’ve already had plenty of opportunities to enjoy this tech, which offers super-bright high-beam visibility without dazzling oncoming cars.

I’ve not even managed to catch it out with T-junctions or awkward crests and corners; it always responds quickly enough to prevent blinding other drivers. When it’s as good as this, I find adaptive LED lights are a far more useful safety feature than most other advanced driver-assistance aids. 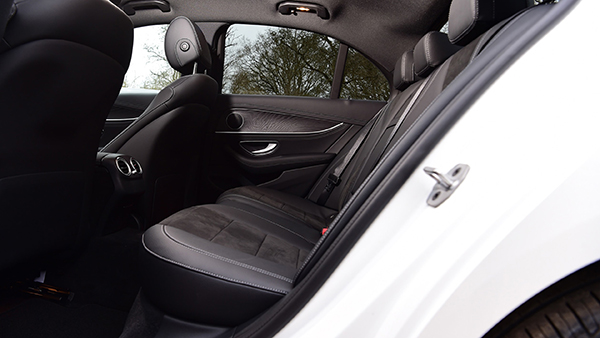 Having said that, it is a frustration that the Mercedes doesn’t get standard adaptive cruise control. Even more so because it has all the fancy hardware and software required for adaptive driving, and uses it routinely to adjust the regenerative braking forces in response to traffic. There’s also no keyless entry, a function I find invaluable given that my hands are often full of toddler and bags.

Those spec frustrations aside, I look forward to driving the E 300 de regardless of the sort of journey I’m doing. Even though the electric range and fuel economy it achieves will be a critical gauge of its relevance, it already makes a world of sense to me.