Out of the 2,200+ doomed vehicles I’ve photographed in wrecking yards over the years, the one with the highest trustworthy odometer reading I’ve found was a gasoline-powered 1987 Mercedes-Benz 190E with better than 600k miles on the clock (the highest untrustworthy odometer I’ve seen lived in a 1982 Volkswagen Rabbit Cabrio showing 930k miles). Today’s Junkyard Gem— also found in the San Francisco Bay Area— is the same year, make, and model of W201 C-Class, even down to the same refrigerator-white paint… but it’s a clean low-mile machine that never even budged the 100,000s digit on the odometer during its 34 years of life. 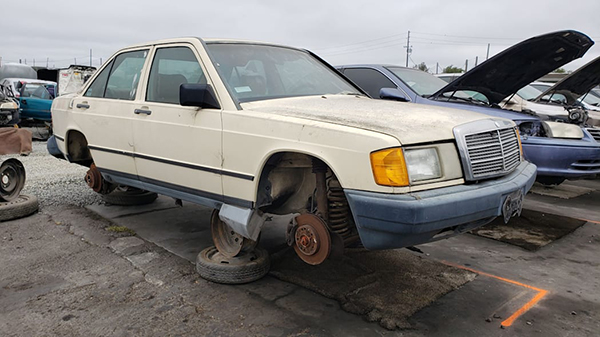 That’s right, a mere 83,890 miles! Perhaps the speedometer or its cable broke early in its career, but VDO makes great gauges and Mercedes-Benz has never cut corners on components such as speedo cables.

The interior is just gorgeous, too, and that’s after going through all the harsh treatment that junkyard cars receive before they even hit the yard. 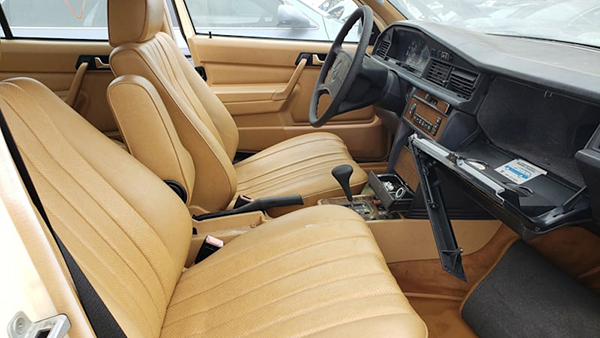 Granted, MB-Tex faux-leather is absolutely indestructible, but these seats aren’t even scuffed.

Mercedes-Benz didn’t start using the C-Class designation until this car’s successor debuted for the 1993 model year, but this is a C-Class at heart.

The 600,000-mile 190E had the 2.3-liter gasoline engine and manual transmission, while this one has the 2.3 and the more common (in North America) four-speed automatic. Maybe the transmission is the component that ended this car’s driving career. 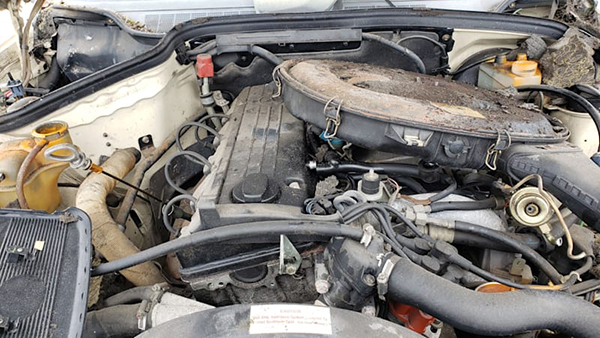 Why did it end up here? We’ll never know. All the grime on the exterior and in the engine compartment suggests long-term outdoor storage prior to arriving here.