Mercedes-Benz ruffled more than a few feathers when it confirmed the next-generation C-Class (called W206 internally) will downsize to a four-cylinder-only range. That means the fire-breathing, V8-powered C63 will lose half of its cylinders, and the silky-smooth straight-six that powers bigger cars will not be available. While all carmakers are trying to keep emissions in check, the German firm explained regulations weren’t its only motivation. 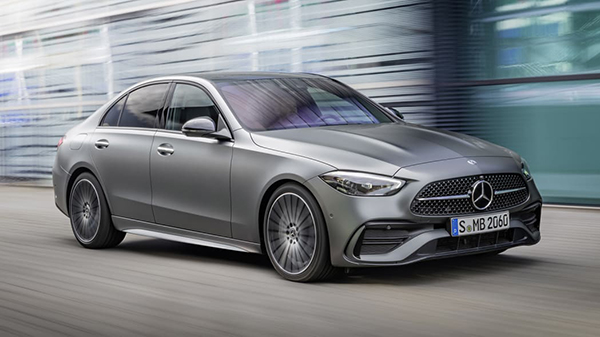 “With the 3.0-liter [straight-six] engine, the front end would have grown by [two inches] in length, not to mention the higher axle load and its impact on driving dynamics,” explained Christian Früh, the W206’s chief engineer, in an interview with Automotive News Europe. He added that plug-in hybrid technology (which adds a not-insignificant amount of weight, too) allowed his team to create a four-cylinder C-Class that offers a level of power comparable to one equipped with a six-cylinder engine. Smoothness and fuel economy are noticeably improved, too.

Electrification will come standard across the board, and it will take different forms, but going entirely electric is out of the question for the time being. Früh pointed out the C-Class is built on Mercedes-Benz’s modular MRA platform, which can’t be fully electrified while keeping costs and dimensions in check. Making a C-Class that runs on batteries would have required significant changes like bigger wheels, additional ground clearance, or both, and the firm would have ended up with a Franken-sedan. Using the Electric Vehicle Architecture (EVA) that will underpin the EQS was ruled out, too, because adapting it would have gone “beyond the dimensional concept and budget of the C-Class.”

Downsized, sharper-looking, and comprehensive redesigned, the 2022 C-Class will make its global debut online on February 23, 2021. Mercedes-Benz will stream the unveiling on its Mercedes Me digital platform starting at 2 p.m. European time, which is 8 a.m. in New York City and 5 a.m. in Los Angeles. Sales will start shortly after.