Mercedes-Benz C-Class has been spied time and time and time again without dropping much camouflage or revealing any other changes it’s set to receive. Mercedes has yet to announce a reveal date for the popular model, though it certainly looks ready for production. The camouflage continues to cover up the subtle changes it appears Mercedes is making to the model, though there’ll be significant changes inside, too, which is unusual for a mid-cycle refresh.

The model will receive updated styling front and rear, some of which are visible through the camo. The BMW 3 Series-competing sedan will surely receive slimmer headlights, which are visible, though other hidden changes could include a revised grille. It’ll be the same at the rear, where designers take a modest approach to updating the model. The mid-cycle refresh won’t change much of the car’s sleek design, though there will be more significant changes inside. 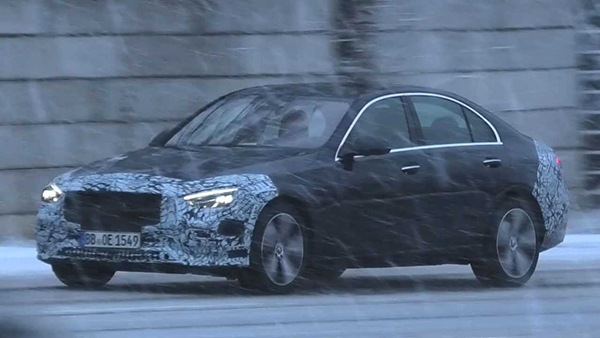 Mercedes is replacing the tablet-style infotainment system stuck on top of the dash for one similar in design to the one introduced in the new 2021 S-Class – an integrated in-dash screen. However, unlike the S-Class, previous spy photos have shown the C-Class with more physical buttons underneath the new screen. The new tablet will likely be the largest interior change for the new model, paired with updated software, though there could be other tweaks or new materials.

Powertrain details remain elusive, though the engine lineup shouldn’t change too drastically from what Mercedes offers now. We’ll likely see the German automaker roll out the sedan first, followed by the two-door models, the long-roof version, and then the hotter AMG variants, which will likely have a 2022 reveal date. There’s also the possibility that Mercedes will offer an All-Terrain version of the C-Class, too, as consumers continue to like higher-riding vehicles.