Mercedes-Benz has nailed the C-Class for the UK. Drivers of the mini-exec car scene want something flash looking, with all the latest mod-cons, and they want it with a sensible engine that’s economical and quiet.

The three-pointed star has delivered on all fronts, while not in any way providing much of a driver’s car or something that’s awfully comfortable. 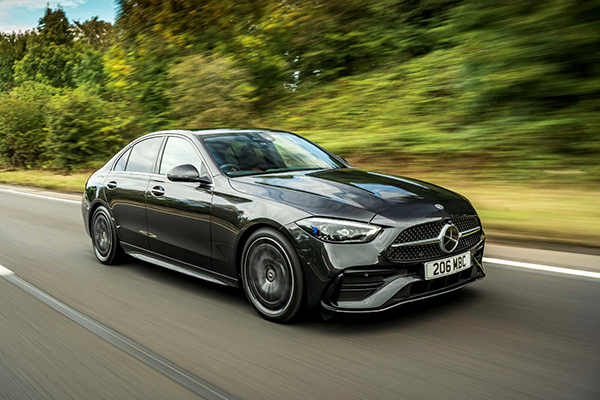 What’s new for the 2022 C-Class?
Though the mild exterior changes might lead you to think this is little more than a half-arsed facelift, there’s a lot of new stuff going on in the cabin and under the skin. With the previous car selling 2.5 million units since launch in 2014, this sixth-generation model has a lot to live up to.

The underlying platform is the same, but virtually no stone has been left unturned, and certainly everything that the driver interacts with is all-new.

It’s slightly longer, wider and lower than it was, but the cab-rearwards silhouette is familiar. As for the styling, it’s the good old Russian doll effect – it looks like an E-Class that’s parked further away. Vertical taillights make way for horizontal ones, there are slimmer headlights and the grille has been flipped upside down. Incremental stuff that’s unlikely to offend, and in the right colour and trim we reckon it looks rather good.

The wheelbase and tracks are longer while the suspension remains double wishbone at the front and multi-link at the rear. 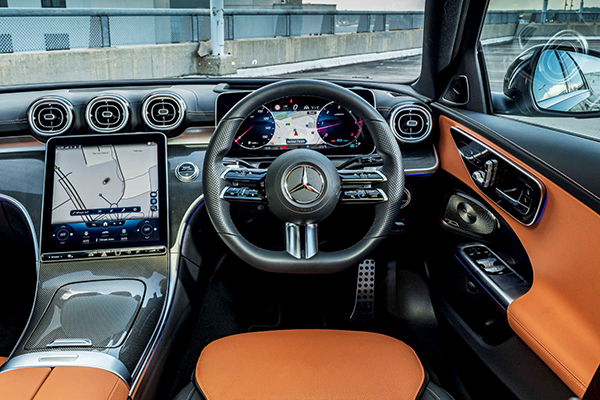 What about inside?
Seen any pictures of the latest S-Class? You’ll know what to expect in the C. It’s a massive departure from before, and centred around two vast screens – 12.9 inches for the driver and a portrait-oriented 11.9 inches for the infotainment.

The central screen controls more than just music and sat-nav, with even the climate controls positioned in the lower third. Very surprisingly, though, it’s remarkably easy to use.

It’s based around personalised profiles, and you’ll be able to sign in with a built-in fingerprint reader to have the car know things like your seat position, preferred radio station and typical satnav destinations.

Better than buttons? Of course not. But better than just about any other primarily touchscreen-driven interior we’ve used of late. The screen is bright, clear and responsive, the layout makes sense, and perhaps thanks to the shallow angle of the display everything’s very easy to hit even with an unsteady hand.

The switchgear all feels top-shelf in terms of quality and there are some useful, usable touches – such as standard wireless phone connectivity and a wireless charging tray that keeps your smart device out of sight and temptation.

A couple of criticisms – one is that the screen does tend to catch the light more than a more vertically-positioned one would. This will likely only be an issue in top-spec cars with the panoramic sunroof, but it’s still annoying.

The other is more damning, and it’s that there’s a general lack of space inside the C-Class. Four six-footers will be snug, and headroom in the back is limited. The wide centre console makes the front passenger footwell very narrow, too.

The boot’s reasonably well-shaped, but 25 litres smaller than that on the 3 Series or A4 – though the Estate does go some way to addressing this. 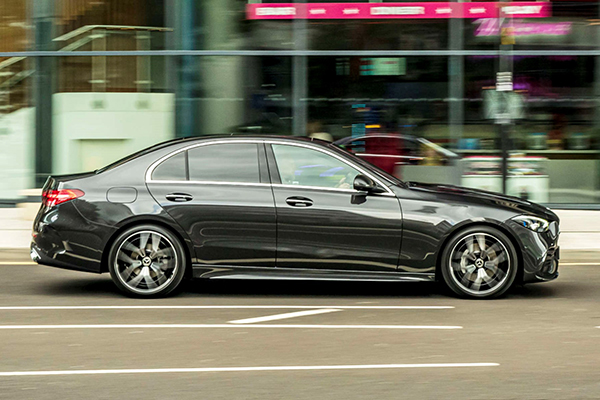 What engines are there?
From launch, four – two petrols and two diesels, all with mild-hybrid tech to boost efficiency and responsiveness. The integrated starter motor offers 20bhp extra to reduce turbolag and a further 27bhp of overboost when you floor it.

In reality, though, most will opt for one of the diesels. We drove the C 220 d, which is a 2.0-litre with 197bhp. It’s about as good a match for the C-Class as anything, thanks to an easily-ridden wave of torque and a nicely slushy nine-speed auto. It’s also commendably quiet.

If that sounds like an uninspiring range, it is. They’re pragmatic and promise strong efficiency but so far there’s almost zero excitement to be had. And there are a few niggles – a decidedly mushy brake pedal, for one, and a tendency for the gearbox to thump when you put your foot down.

Later on there’ll be a petrol plug-in hybrid – this promises over 60 miles of all-electric range, which is an impressive figure. A diesel hybrid and AMG models will follow in 2022 – the latter eschewing its predecessor’s V8 for a four-cylinder hybrid setup. 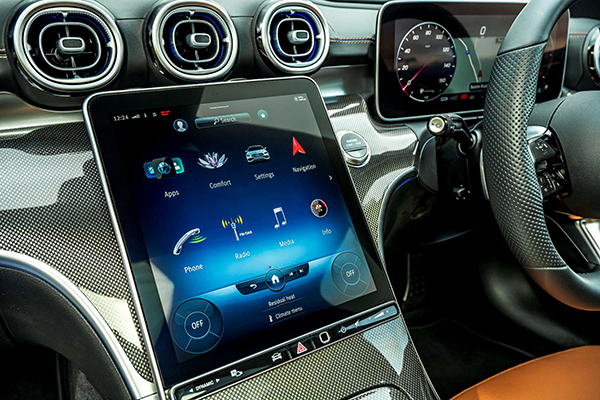 Any good to drive?
Keen drivers will still appreciate the BMW 3 Series more, but the C-Class doesn’t disgrace itself – as with the engine lineup, it’s very competent if a little unexciting.

The steering’s nicely weighted and direct, while the handling is without drama. Mercedes says the real focus is on comfort. Judging by the AMG Line car we tested, it has failed at providing a flawless product.

We won’t get adaptive dampers in the UK and the C-Class really feels like it needs them. The low-speed ride is far too stiff and will have drivers wincing at the sight of speedbumps. We suspect the 19-inch alloys on our test car didn’t help things. 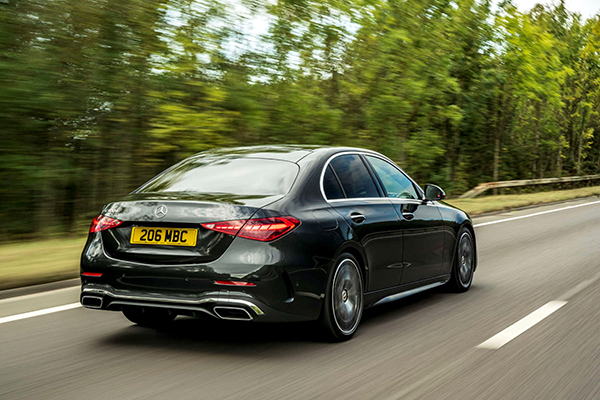 Verdict
It’s a hackneyed turn of phrase to say it’s like a baby S-Class, but with this new generation that’s closer to the truth than ever before.

Thanks to that brilliant dashboard and touchscreen this feels a generation removed from its 3 Series and A4 rivals – a trend that may well continue when the engine range is fleshed out with more up-to-the-minute PHEV options.

Practicality concerns plague the C-Class and raise questions about its use as anything but a rep’s mile-muncher, and of course it does come a bit unstuck as a product because of how rough the ride is.

UK buyers mostly want something that looks great and will get their passengers talking. And Mercedes has nailed this. It’s just a shame the passengers will inevitably be asking ‘can you go a bit slower over the speed bumps?’