Buying a damaged car is always a risky proposition, even for seasoned repair pros. That’s because hidden damage is almost always present, and since it’s hidden, you don’t usually find it until the repair process has begun. Such damage can turn an easy repair into a nightmare, but this particular YouTuber may have lucked out – and with a 7,000-mile 2019 Mercedes-AMG C63 Coupe no less.

I Just Bought A Badly Wrecked 2019 Mercedes C63 AMG From Copart And Got EXTREMELY LUCKY…Again!!

The clip comes from BackYardBoyz and for the record, we don’t get to see the car repaired. This is just the introduction, but it’s interesting because the car came with some welcome surprises literally stuffed into the interior and trunk. It was purchased online through Copart, meaning the pre-purchase inspection was limited to what could be seen in photographs. Those shots showed a nearly new AMG with a crunched door and quarter-panel, a damaged rear bumper, a missing front bumper, and numerous other absent components including various trim pieces for the interior and exterior, mirrors, taillights, and headlights.

The final auction price for this car was just $30,250 – a steal considering the MSRP was upwards of $70,000. Of course, it’s not exactly road-ready, and anyone familiar with late-model Mercs knows just how expensive parts can be. The missing pieces alone could total $30,000, but here’s where this story takes a turn for the better. The interior and trunk were packed with most of the missing parts, including the AMG front bumper and all the missing interior components. Apparently it was taken apart for inspection and then tossed into the car. Almost all, anyway – there’s still a missing headlight, which could be quite expensive on its own. 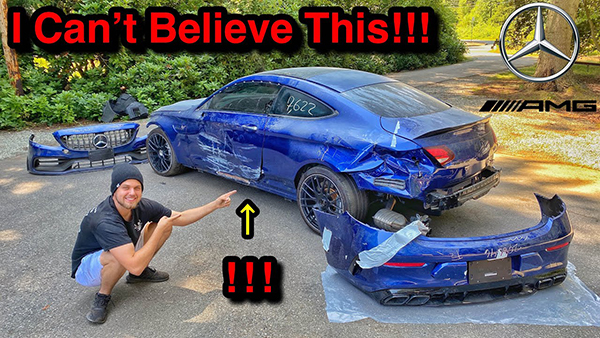 There was indeed some hidden damage that the photos didn’t reveal. The driver side unibody structure was slightly wrinkled down low, and a section of the high-strength steel had been cut away at the base. However, the YouTuber wasn’t fazed by the discovery, and frankly, if the car can be repaired for $20,000 it would still be quite a deal for a nearly new C63 AMG.

Still, there’s a reason the car was sold at a salvage auction instead of being repaired, and this intrepid YouTuber does confess to not having experience working on an AMG Mercedes. Do you think he’ll be in for more pleasant surprises, or is this a money pit in the making?