This accident was captured on dashcam last month, showing the driver of a dark Mercedes C-Class sedan losing control at high speed and impacting both barriers before coming to a halt. We suspect that they were street racing another Mercedes, this time a white C-Class sedan, which can be seen entering the frame rather aggressively.

The crash took place on the FDR Drive in New York City, and it’s obvious to us that the entire debacle could have easily been avoided had the Mercedes driver not been so reckless.

Also, the fact that the dark sedan basically slid into the concrete barrier under braking tells us that we may be dealing with an inexperienced driver, who possibly panicked as they felt the car starting to understeer. Of course, if they were indeed racing the trailing white C-Class, then perhaps they also weren’t paying full attention to the road ahead. 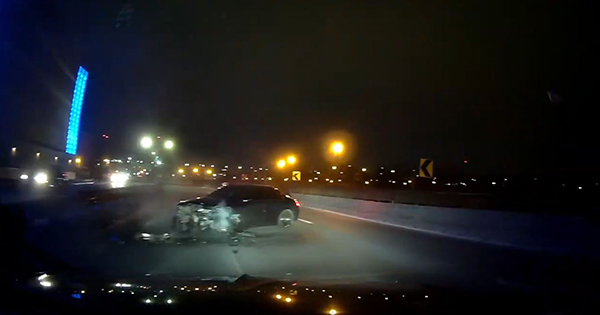 In any case, the resulting crash proved debilitating for the car, as it bounced from the concrete barrier into the metal guardrail on the left side of the road, catching air and doing a 90-degree spin before stopping. The white Mercedes thankfully had time to maneuver past its German sibling.

As you can see, the damage is quite extensive. The entire front end of the sedan was destroyed, and that front axle looks all messed up. At that point, if the structure of the car is also compromised, you can pretty much count it as a total loss.

The only bright side here is that no other vehicles were involved. These types of incidents will often result in collateral damage – look at what happened to that Dodge Challenger that was speeding after a Tesla Model 3 just last week. The muscle car plowed straight into another vehicle; all because of reckless driving, plus a bit of road rage, in that particular case.