The new Mercedes-AMG One is now (November 2022) the fastest production on the Nürburgring-Nordschleife lapping the track in 6:35.183 min.

New Mercedes-AMG One Laps The Nürburgring In 6:35.183 min

Mercedes took the AMG ONE at the Nürburgring-Nordschleife where it set a new record for production vehicles despite the less-than-ideal conditions. Driver Maro Engel set a lap time of 6:35.183 around the 20.832 km track, making full use of the F1-derived tech and hybrid powertrain that delivers 1,049 hp.

Mercedes said that while the weather was sunny, the track was still damp and partly dirty in some areas, making life harder for the experienced racing driver. There was also a time issue, with less than an hour to complete the record attempt, which is why the automaker brought two examples of the hypercar to the Ring. Finally, the record was set on October 28 at exactly 17:14, which is just a minute before the Nürburgring-Nordschleife closes. 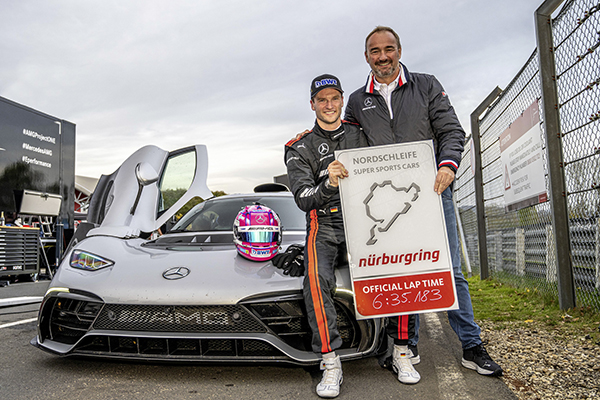 DTM driver and Mercedes-AMG ambassador Maro Engel said: “That was really an unforgettable experience. I didn’t expect that we would be able to set such a lap time with these track conditions. In some crucial areas of the track, it hadn’t dried completely yet and was therefore tricky. That was a special challenge”. Engel also commented that the AMG ONE is “certainly more at home on a Grand Prix circuit than on the Nordschleife” due to the track’s length which meant he had to make clever use of the DRS function and maximize energy recovery during braking.

The driver opted for the “Race Plus” driving program which utilizes the maximum 1,049 hp (782 kW / 1,063 PS) of power from the 1.6-liter turbo V6 engine and the quad electric motors, lowers the adaptive suspension even further, and adapts the active aerodynamics accordingly. During the record lap, the driver managed to hit 338 km/h (210 mph) on the Döttinger Höhe straight, which is close to the hypercar’s advertised top speed of 350 km/h (217 mph).

It remains to be seen if the impressive record of the Mercedes-AMG ONE will stand the test of time since there are some pretty capable contenders out there that might try and break it. We are obviously talking about the Aston Martin Valkyrie which is considered a direct rival to AMG’s F1-powered rocketship.