Inspired by Formula 1 technology we created the One and Only Mercedes-AMG ONE. Alongside the Mercedes-AMG GT 63 S E PERFORMANCE the DNA of Mercedes-AMG Driving Performance has been transferred successfully to the streets. Stay thrilled for an electrified future.

Jochen Hermann, chief technical officer at Mercedes-AMG, says that a lot of tech from the ONE went into the GT 63 S E Performance, starting with the battery pack, which features twice the power density of conventional batteries. “It’s the same idea, the same software strategy, the deployment strategy, what do we do with the energy while braking, while boosting.”

Hermann further highlights that both cars feature an electric mode, “but it’s not the range that we were focusing on.” More specifically, the lightweight battery inspired by the one that Mercedes-AMG uses in Formula 1 allows for 12 kilometers (7 miles) of zero-emission driving. The ONE, which is quite a bit lighter, musters a little bit more than 18 kilometers (11 miles). 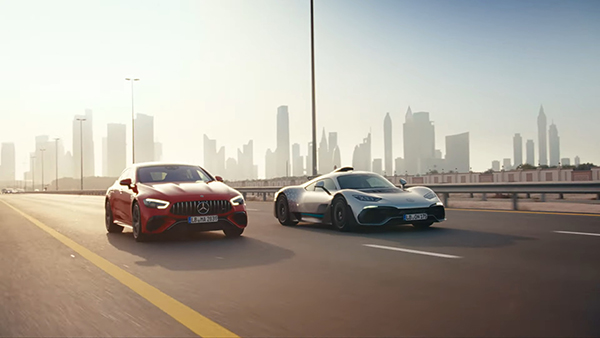 The featured clip begins with Jochen driving the ONE in Abu Dhabi, at the Yas Marina Circuit that hosts the final round of the Formula 1 World Championship. He parks the car in front of a pit box, where a red-painted GT 63 S E Performance is much obliged to strike a pose next to its lighter sibling. The cars are then pictured on the streets of Abu Dhabi, but curiously enough, only the high-revving V6 of the ONE is heard in these scenes.

For all that lyrical waxing, the chief technical officer of Mercedes-AMG could have also mentioned the 3.7-kWh onboard charger of these cars. By comparison, the Tesla Model S Plaid can accept 250 kW for five minutes.

Criticism aside, why should Mercedes-AMG even bother with a faster unit? To the point, battery capacities of 6.1 and 8.4 kWh don’t actually call for the latest and the greatest charger the automotive industry has to offer.