Mercedes-AMG One has a transmission and hybrid system developed from the Mercedes-AMG F1 car. With over 1,050PS from the 1.6-litre V6 engine the One is capable of doing 219mph and will hit 124mph in less tan six seconds.

After years of delay, Mercedes-AMG finally revealed the production version of the ONE, at the beginning of June. And now the high-performance car maker sent it to Goodwood for its dynamic public debut. It was a total show-off.

The spectators at the Goodwood Festival of Speed had the chance to watch the first hypercar Mercedes-AMG has ever built. Considering all the trials and tribulations all throughout development, it might as well be the last. “We must have been drunk when we approved this project,” the company’s CEO, Ola Kallenius, stated right before the official reveal of the model. 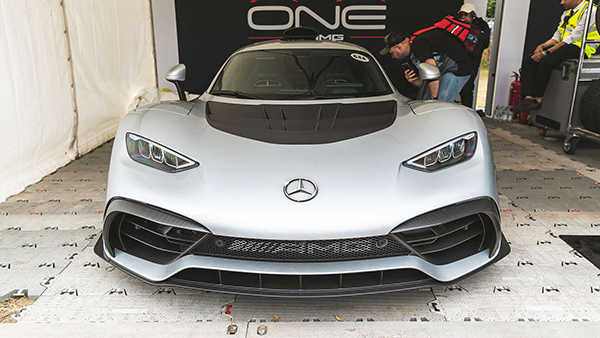 Thus the soundtrack at the Goodwood Festival of Speed circuit was not exactly what you’d expect from a hypercar. It showed off among the stacks of hey, with its out-of-this-world looks and its prominent tail wing that enhances down force. That’s a sight you don’t see every day on the road and makes the Mercedes-AMG ONE look more like a plane than an actual street car. But people expected to hear more than an angry mosquito, the type they hear during the F1 races.

Due to homologation issues, the American customers won’t be seeing it and hearing it at all. Some of them that ordered one such hypercar are still to get their money back. Only 275 people will be getting their hands on the exclusive ONE.