Mercedes-AMG One hypercar has just silenced all its doubters by obliterating the Nurburgring record for road-legal production cars, setting a time of 6:35.183 on the long-format track and 6:30.705 on the headline-grabbing shorter course. It beat AMG’s previous crown jewel, the AMG GT Black Series, which stole the Lamborghini Aventador SVJ’s thunder when it set a new record almost two years ago. But what’s more important to Affalterbach’s engineers is that the One’s time is an astonishing eight seconds quicker than the record that stood before today, which was held by the Manthey Racing Porsche 911 GT2 RS that set times of 6:43.300 and 6:38.835. The rivalry in Stuttgart just got hotter. 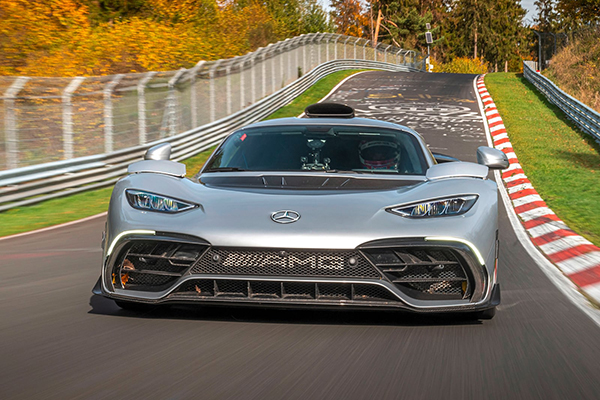 Above, you can watch the lap from DTM racing driver Maro Engel’s point of view, with the below video providing a little more theater. What’s particularly astonishing is that conditions throughout the day were “less than ideal,” and the record-breaking time was set on the Eifel asphalt at 17:14:31 – the track would have been officially closed at 17:15.

Engel had already set a new best time earlier in the day, but as the light waned and the evening approached, conditions continually improved. “That was really an unforgettable experience,” said the racer. “I didn’t expect that we would be able to set such a lap time with these track conditions. In some crucial areas of the track, it hadn’t dried completely yet and was, therefore, tricky. That was a special challenge.” This suggests the hypercar could go even quicker, but we doubt AMG will go back for some time, if at all.

The racing driver added that he had to behave like Lewis Hamilton and George Russell on their race weekends: “I also had to deploy the electrical energy of the hybrid drive in the best possible way. That’s not easy, especially with this length of track. In addition, the DRS function had to be used optimally. But that’s also a real Formula 1 feeling.”

This record must be especially gratifying for those who brought the complex creation to production. Mercedes boss Ola Kallenius reportedly joked earlier this year that the board must have been “drunk” when agreeing to develop the car. Indeed, after nearly five years, many began to wonder if AMG had bitten off more than it could chew. This record validates all their efforts and lofty ambitions.