Turns out reports of the death of AMG’s wildly ambitious One hypercar were exaggerated. After numerous delays and comms black-outs Mercedes-AMG has confirmed that the road-going version of Lewis Hamilton’s F1 racer will, finally, go into production in the middle of next year. 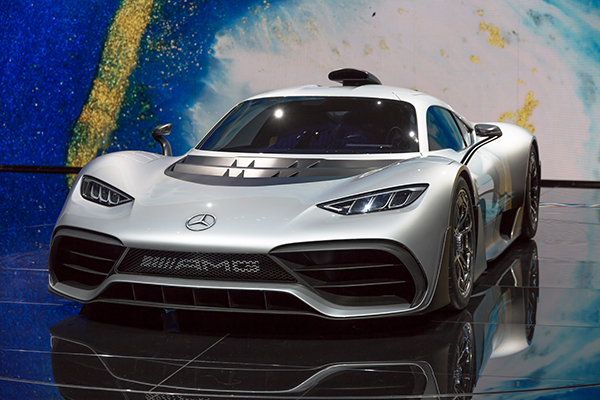 AMG isn’t giving reasons for the car’s drawn-out genesis but the pandemic is undoubtedly partly to blame, as is the horrifyingly complex engineering challenge the car’s powertrain represents.

In case you’ve forgotten (understandable: it’s been a while), the One – unveiled in concept form by Hamilton and then Merc CEO Dieter Zetsche back in 2017 – is built around a modified version of AMG’s all-conquering hybrid F1 powertrain. So, that’s an e-turbocharged, hybrid-boosted 1.6-litre V6 combustion engine and no less than three electric motors (the rear-drive F1 car uses just one) driving all four wheels. The headline numbers were – and still are – big: more than 990bhp from just 1.6 litres, a 16-mile electric range, 0-124mph in less than 6.0sec and a top speed north of 217mph.

Prior to the pandemic, and before his move to Aston Martin, AMG CEO and CTO Tobias Moers talked to CAR about the towering challenge of teaching such an uncompromising powertrain some road-legal manners.

‘Regulations got harder than we expected,’ said Moers. ‘It’s not easy putting an F1 engine on the road. Take the idle speeds. On the F1 car it’s 6000rpm. For a street-legal car it should be 1000rpm, maybe 1200rpm. And on the F1 engine combustion is great at high revs and under load, but it’s not so good at low revs, the conditions you mostly run under for the emission test cycles. It’s taken a lot of effort to get things where we need them.’

Talking to CAR more than three years later, the man who inherited Moers’ to-do list, Philipp Scheimer, was equally forthright on the One’s troubles. ‘Probably the most challenging project we’ve ever worked on,’ said Scheimer. ‘We’re fighting for our targets to start production this year [not going to happen…] but it’s still a really tough fight. But we have driven the car and it is absolutely mind-blowing.’

Words to encourage those buyers waiting patiently for the AMG that very nearly wasn’t.

Mercedes-AMG One: all you need to know
If your brand’s cars are dominating the world’s Formula 1 circuits, it makes sense to celebrate. Timed to coincide with AMG’s 50th anniversary, this one hell of a celebration from Mercedes-Benz.

This is the Mercedes-AMG One (Project One) hypercar, having its world premiere at the 2017 Frankfurt motor show in show car form. It’s perhaps as close as a modern road car can get to the mythical ‘Formula 1 car for the road’ maxim, as it features a 1086bhp hybrid powertrain closely related to the one you’ll find in Lewis Hamilton’s Grand Prix challenger.

It’s important to note that this is a concept car, rather than the final production model – first cars will be delivered in early 2019.

New ‘official spyshots’ released by Mercedes show the hybrid hypercar testing at what appears to be Millbrook, and as you’d expect, it’s covered in camo.

Alongside the new images, Mercedes have given us an update on how the hybrid hypercar is coming along, too. According to the release, Mercedes’ HPP team at Brixworth have already spent hours making the F1-derived powertrain ready for production, and the 1000+bhp unit has passed all its dyno tests.

Now with the new powertrain installed, the Mercedes-AMG One (Project One) has been papped testing around Millbrook, but Mercedes says: ‘because of their characteristic F1 sound [the prototypes] are hard to keep from the public.’

How fast is the AMG One?
Top speed is quoted at ‘beyond 350kph (217mph).’
Use the Race Start function and Mercedes claims 0-124mph in ‘under six seconds.’

Does this car really have an F1 hybrid powertrain?
Something very close to one, at least. The engine bit of the equation is a 1.6-litre single-turbo V6, closely related to that found in Lewis’s F1 car and engineered by Mercedes’ F1 powertrain plant in Brixworth. It revs to no less than 11,000rpm – lower than the F1 engine, due to lower-octane pump fuel, but still Pretty Good Going for a road car engine. It generates 603bhp (from a 1.6!).

Unlike an F1 car, the hypercar is all-wheel drive, with torque vectoring helping to translate all that power in a direction of the driver’s choosing.

In addition to the V6, there are four electric motors. Two drive the front wheels, then there’s a further 120kW one attached to the V6 engine’s crank, and an 80kW one is fitted within the turbocharger itself. This last one, designed to cheat turbo lag and called MGU-H (motor generator unit – heat) in F1 terminology, can rev as high as 100,000rpm.

The front wheel motors help with torque vectoring to trim the car’s line and sharpen turn-in response. Each has its own single-speed gearbox. Engineering the electronics to control each of these motors is no small feat…

Is this a proper hybrid with an EV mode?
Fully charged, expect a pure electric range of approximately 15 miles. It can set off with the front motors doing the bulk of the driving, and the electric motor on the crankshaft supporting for bursts of acceleration. Use a bit more throttle and the V6 will fire up automatically.

KERS-style energy recovery features on the front wheel motors, too .When coasting off-throttle, the system switches back to electric drive on the front axle to recuperate energy, fed back into the batteries.

How powerful is the AMG One? And how long will it last between service intervals?
Add the motors’ combined efforts to the V6’s 603bhp and you’re looking at 1086bhp total – with an extra 48bhp in overboost mode making for 1134bhp altogether.

Given that the car won’t weigh much more than 1200kg (420kg of that being the four battery packs and the electric motors) it’ll be Quite Quick – 0-62mph should be done and dusted in less than 3sec.

You’re looking at around 30,000 miles before the engine needs maintenance – a figure that’s easier to swallow when you consider that an F1 engine is designed to be rebuilt every four to five races.

Structure
A steel platform supports the carbonfibre monocoque chassis,with transverse pushrod-operated suspension. The rear suspension bolts straight to the transmission, F1-style, while the front suspension is attached to a small subframe.

Wheels
Ten-spoke magnesium wheels with drag-reducing ‘aero blades’, wearing Michelin Pilot Sport 2 tyres specifically designed for the car. They measure 285/35 R19 at the front, and 335/30 R20 at the rear.
All four wheels steer, by the way…

Interior
The seats are fixed, the pedals aren’t. The steering column is adjustable, as are the seat backrests – they’re not fixed buckets, or not as standard, at least. There’s a reversing camera on the roof, displayed in the rear-view mirror.

It’s understood that the package was extended three times – not least because Mercedes top brass Dieter Zetsche and Ola Kallenius are tall, and the legroom, headroom and visibility had to be signed off by the board.

There are two LED monitors, one in the centre stack and one in front of the driver.

Storage space is mostly limited to door pockets and recesses behind the seats.

Safety
As many as 12 pre-production prototypes will be crash-tested in the EU and US.

The hypercar will feature at least four airbags, maybe more, and the monocoque is very strong.

Rivals?
The Mercedes-AMG One (Project One) is a more track-focused kinda car than the Bugatti Chiron. In a more similar vein, Aston Martin’s Valkyrie and McLaren’s BP23 will be on the scene by 2019 too.