This is the really very final production version of the 1,000bhp+ Mercedes-AMG One. That’s right, on AMG’s 55th anniversary comes the long-awaited hyper-F1 car for the road. Not a figure of speech, but a fact, because the AMG One famously uses the 1.6-litre turbo hybrid V6 from Hamilton’s F1 car. Well, when Hamilton’s F1 car was fast. AMG worked closely with the F1 bods at Brixworth to build a turbocharged combustion engine with four electric motors: one on the turbo, another on the engine and two driving the front wheels, each able to spin up to 50,000rpm. The whipcrack quick V6 is mounted in the middle, and revs to 11,000rpm – a little shy of Murray’s T.50 and the Aston Martin Valkyrie, but still. Eleven thousand. More F1 tech arrives in the shape of the MGU-K, which harvests surplus exhaust gas energy and stores it in the battery or feeds it straight into the electrified front axle. With everything singing together – MGU-K, MGU-H, front axle motors and engine – the whole thing punches out 1,048bhp. Hilariously, AMG can’t tell us the torque figure because of the “complex drivetrain”. That’s right, the One is too complex for human minds. Estimated performance figures are as follows: 0-62mph in 2.9s, 0-124mph in 7.0s, 0-186mph in 15.6s and a top speed of 219mph. On the other end of the scale, it’s capable of just over 11 miles on battery power alone, while combined emissions stand at 198g/km. And how does this 1,695kg monster look? ‘Muscular’ is how AMG describes it, and there’s no denying its presence. Low, wide with a ‘wasp’ waist designed for optimum aero efficiency, it’s said to generate downforce from as little as 31mph. Which should make the drive to your weekly shop very entertaining. It’s been a long time coming, but has the wait been worth it?

Despite the AMG F1 team being involved, the AMG ONE presented a number of challenges when it came to making an F1 engine behave.

AMG enthusiasts have been waiting ever patiently for the AMG ONE, and by the looks of it, it’s finally here. Top Gear has had a hands-on opportunity with the car, and we get to learn some more details – and headaches – that caused this car to have a 5 year development.

Top Gear host Jack Rix was able to get a preview of the production car, finally. The stats are quite amazing, as one would expect. In total, 1,063 horsepower is on tap. That’s from all of the various power units available. electric motors drive the front, axle, and the hybrid 1.6 V6 F1 engine powered the rear axle.

But as anyone knows, you can’t just take an F1 engine and put it in a car. Each F1 driver has a team of engineers making sure vital signs are all nominal, and a car doesn’t have that. But it does have computers that can help along the way, says AMG ONE project manager Marco Lochmahr. 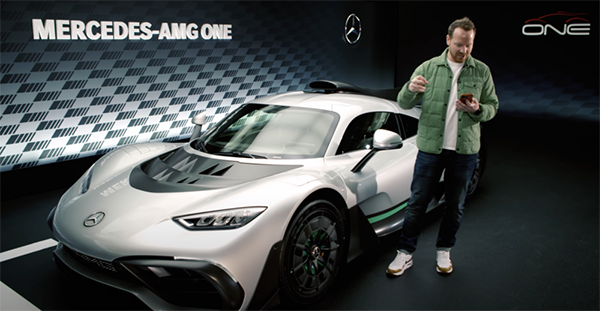 “This whole ‘race crew’ intelligence is implemented here in the vehicle,” says Lochmahr. Sensors, special software, and control units help keep all of those parameters in check so the customer can sit inside, press one button and go for their drive. Sounds like computers would have a good handle of it, but computers can only handle programming, not mechanical limitations.

“This was one of our challenges, to reach this idle speed of 1,250 [RPM]. And it was very very challenging to reach the emissions target of this vehicle,” Lochmahr noted of the F1 engine’s race bred habits. Even at just 1.6 liters, the tolerances and tightness of an F1 engine are far beyond anything you’d see in a road car. Idle speed at 1,250 RPM in a road car is high, but the AMG F1 engine idles at almost 5,000.

Plus, the F1 car is meant to launch once, then race. The AMG ONE has to do it multiple times. Per day. Pr hour, if you’re in stop and go traffic.

And it explains why other manufacturers like Aston Martin have gone the route of a V12. It’s safe. It’s not a challenge. And it doesn’t take nearly the same genius and ingenuity that the AMG ONE team poured into this car.