Mercedes-Benz AMG has released a video showing how its newest flagship compares to its former one, in a drag race.

We’re talking about the One hypercar which goes up against the GT Black Series, two cars designed for ultimate track performance but with very different methods of execution.

While the GT Black Series went down the traditional route of a powerful V-8 up front and drive sent to the rear wheels, the One features the same engine found in the current crop of cars raced by the Mercedes Formula 1 team. It’s a 1.6-liter turbocharged V-6, specifically the unit from the championship-winning race car from the 2015 season. 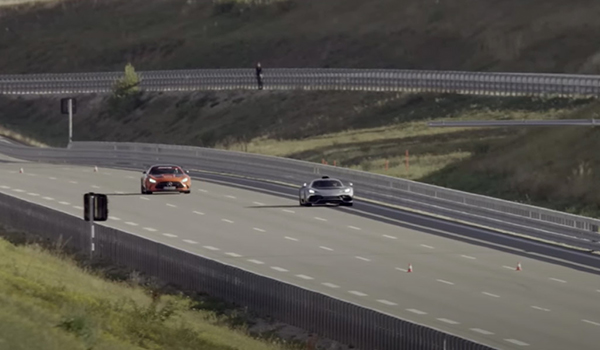 The One actually features a more sophisticated powertrain than the F1 car, though. While in the race car there’s only the turbocharged V-6 and a motor-generator driving the rear wheels, plus a second motor-generator integrated with the turbocharger, the One has all that and two more motor-generators. These drive each of the front wheels and provide the One with all-wheel drive. Peak output is 1,049 hp, though the car is relatively heavy for a two-seater, weighing 3,737 lb, or close to the weight of a Ford Mustang GT.

Nevertheless, acceleration is breathtaking, as we see in the video. Mercedes quotes a 0-62 mph time of 2.9 seconds for the One, though that’s likely on the conservative side as the car easily outguns the GT Black Series. That car’s official 0-62 mph time of 3.1 seconds has been outpaced during official demonstrations with ease. For comparison’s sake, the GT Black Series only has 720 hp.

No track figures for the One exist yet, but given the performance it demonstrates here, it very well may deliver a new production car lap record at the Nürburgring, a racetrack where the One was spotted testing as recently as August. The time to beat is 6:43.61, set in 2020 by none other than the GT Black Series.