In the 1980s, when Mercedes-Benz decided it needs a successor to the legendary 300SL, it started working on a new roadster, which made its official debut in 1989. Sold until 2001, the luxury open-top model is among the most valuable used Mercedes vehicles on the market with prices going up every year. With 213,089 examples built, it’s not exactly rare, though it is considered exotic to a certain extent.

Known internally as the R129, the SL from the 1990s is ever rarer in right-hand-drive configuration. Finding one for sale is a difficult job and finding one sitting in a barn is even more challenging. However, The Bearder Explorer, a YouTube channel exploring “anything abandoned and derelict across the world,” was lucky enough to find an amazing red 300SL from the early 1990s. Here’s the story.

One of the host’s followers contacted him and told him they have a very rare car sitting locked in a garage. It’s been sitting there for almost ten years and its current condition was unknown. Ah, and there was a catch – the host of the video wasn’t told what car hides in the garage and he wasted no time visiting the place a few weeks later. 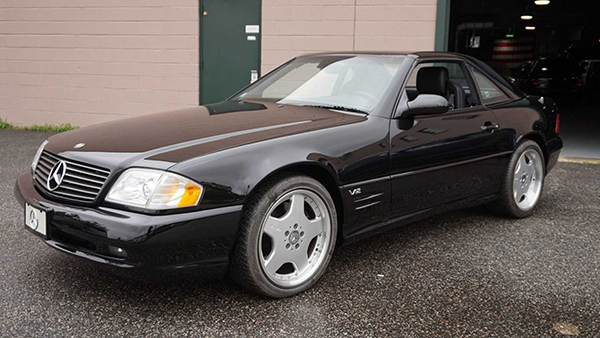 As you can see in the video, the host arrived at a place with a few garages and a red Vauxhall Frontera Sport sitting in front. The SUV is also an interesting vehicle – from a rare version and with relatively low mileage – but the star of the video sits behind one of the doors. There, a spectacular red Mercedes-Benz 300SL has been hiding for the last decade and we are surprised to see it’s actually in very good shape.

The entire car is covered in towels, probably in an attempt to preserve it from dust. The good news is the cloth roof is almost immaculate aside from the dust – a good clean and conservation will bring it back to factory condition.

We don’t know what’s the fate of this 300SL – is it going to be restored? Or is it going to sit in this garage for another decade before someone discovers it again? We have no idea but we know it’s safe there and future generations will most likely see it on the road one day.