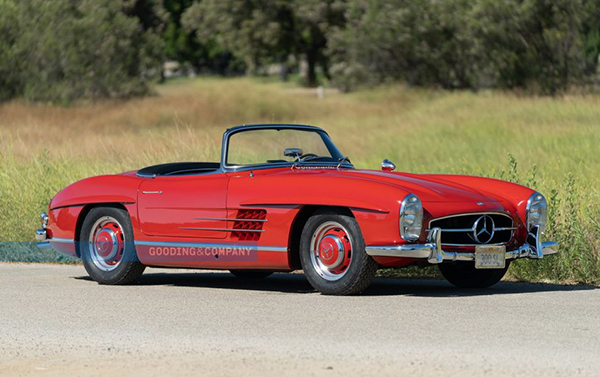 Starting with the 2780 chassis series, Mercedes replaced the drum brakes with disc brakes with a diameter of 290 mm both front and rear. The introduction of disc brakes reduced the unsprung masses and substantially improved braking performance. 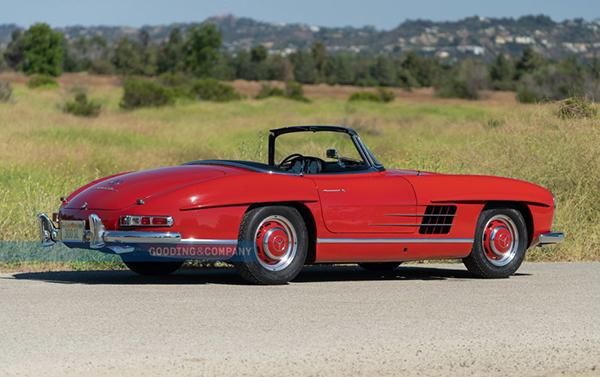 Only 218 cars out of 1,858 with aluminium engine block and disc brakes
Since the 3049 chassis series, the engine block has been built from aluminium and the weight on the front axle has reduced by a further 22.7 kg (50 lbs), giving better front-rear weight distribution and improving agility. Only 218 Mercedes 300 SL Roadsters out of a total of 1,858 built have brake discs and aluminium engine block. This is why they are called “disc-brake, alloy-block” cars.

The model up for auction has chassis number 003105, was built in July 1962 and is painted in fire red (DB534) with a black softop. The car runs on Sport wheels with polished alloy outer rims and Continental tires.

Gooding&Company’s press release says nothing about the first owner. The car was restored by an owner located in Florida and sold in 1982 to Joan and Wolfgang Fuss. They had been members of the Gull Wing Club of California since its inception in the early 1960’s and participated in Gull Wing Groups rallies, shows and events. The only modifications they made to the car were the adoption of European headlights and a custom 300 SL license plate that is still on the car today. 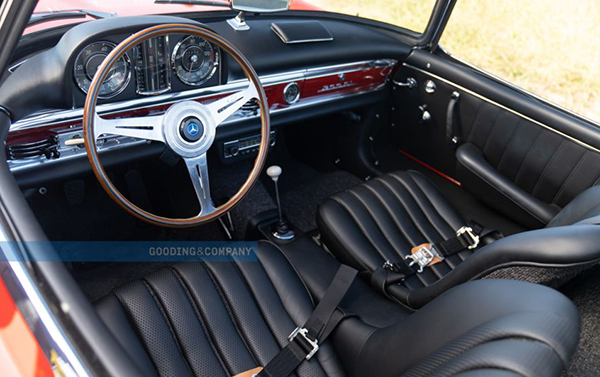 After Wolfgang Fuss’ death in 2011, Joan Fuss continued to participate in Gull Wing Group events and drove the car on local tours. In 2003, Mrs. Fuss sold the car to longtime friend and club member Dr. Harry Love in Palo Alto, California. Dr. Love is a fine connoisseur of 300 SL models having owned several examples including a low mileage 300 SL Gullwing.

In 2008, the interior was completely refurbished from the leather upholstery to the aluminum inserts by Richard “Stitch” Coleman of Fresno, California. He also installed a new black canvas top.

The estimated sale price is between $1,750,000 and $2,250,000. This is a price that reflects the car’s exceptional condition, the extremely low mileage of only 1772 miles, the fact that the car has been driven for more than 40 years in California’s mild climate and has been owned by members of the Gull Wing Group.