Some people are still trying to grasp the concept of 1,350-horsepower, world-record drag racing C8 Corvette Stingray aftermarket builds in the real world. Bot over across the virtual realm, increasingly more are just thinking about the newer Z06 goodies. 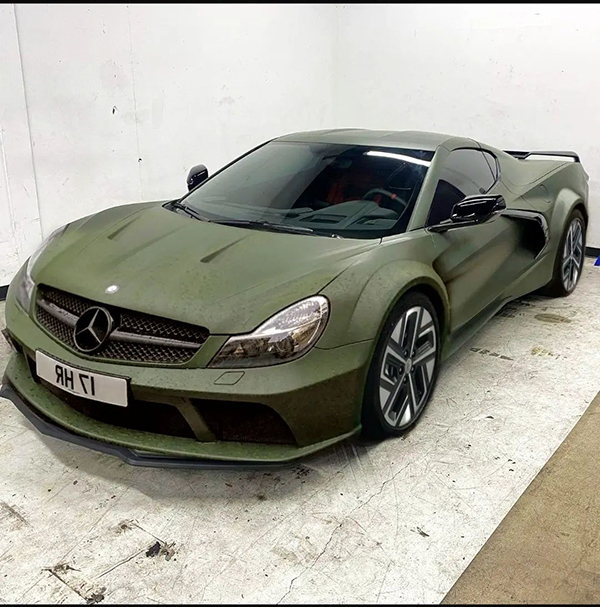 From hungry mid-engine Camaros that looked like they swallowed a C8 Chevy Corvette Z06 whole to imagined Chevy SS returns by way of four-door Z06s, and from sixth-generation Dodge Vipers unofficially taking a jab at the FPC mid-engine wonder to hunkered down Nissan minivans going on a Vossen Z06 quest, anything goes, it seems.

And Henry Andrews, the virtual artist better known as photo.chopshop on social media, who has a prolific imagination when it comes to CGI mashups, could not stay away from “America’s sports car” for long. Before this, he even thought of a Z06 Corvette X Caddy CTS-V to present a carbon fiber-clad XLR-V revival, among others.

But this time around, the new record-holding naturally-aspirated flat-plane crankshaft kid on the block takes a healthy dose of CGI Mercedes-Benz steroids by way of mixing its style with the R230-generation SL 65 AMG Black Series. And, oddly enough, it’s not murdered-out to fully complete the transformation, but rather dressed up in a dark shade of green and wearing some interesting aftermarket shoes… err, sorry, wheels, plus a little bit of wider flares.

Well, as far as this pixel master is concerned, too many mysteries will remain unsolved. Some, if not most, have to do with all-black mashups – which might sound better in theory but are times worse than this matte green Z06 AMG. Just take a look at the other recent ideas shared by the digital content creator that we tucked away in the gallery above! Then, just dare say you do not agree with a fan’s assessment that “again…I like this. I shouldn’t, but I do!”