There is a scene in the new Uncharted movie that made the fans of the Mercedes-Benz 300 SL Gullwing skip a beat. The car simply drops off a plane.

The video-game inspired Uncharted is finally available on streaming services. The movie starring Tom Holland as Nathan Drake and Mark Whalberg as Victor Sullivan is packed with action and heart-stopping scenes. One of them is the one with the Mercedes-Benz 300 SL Gullwing dropping off the plane.

The car in the movie belongs to the villain Santiago Moncada, Antonio Banderas’ character, heir of the House of Moncada. The cargo plane the car is loaded into is one of his means of transportation. And the 1954 automobile comes along. “My father gave me this car when I turned eighteen. It’s been my good luck charm ever since,” he explains. 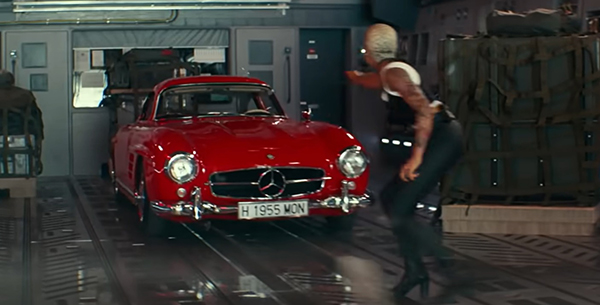 Mercedes-Benz 300 SL Gullwing drops off a plane
Things get complicated on a flight when a fight scene breaks out in the cargo area. We warn you of the following spoiler alert. Chloe Frazer, in her attempt to escape the bad guys, jumps on board the Benz, while being shot at. She turns the key in the ignition and presses the accelerator with one hand, driving out of the plane. On her way into the air, she accidentally hits Nathan Drake (Tom Holland’s character). This is how he ends up fling again, soon after he managed to get back into the cargo area.

Another scene in the movie puts Tom Holland and Mark Whalberg together in the minuscule trunk of the Gullwing. Even though they stayed cramped in there for hours, not much has made the cut.

These are just two moments of the Uncharted movie in which Victor “Sully” Sullivan is on his mission to recover a fortune amassed by Ferdinand Magellan and lost 500 years ago by the House of Moncada.