The year was 1952, and Germany was still working hard to recover after WWII, which ended just seven years before. On March 12th, Mercedes-Benz unveiled the 300 SL (W194) as a pure racing car. It was designed in the fashion of form follows function, with an aluminum spaceframe chassis. Due to that, the side sills were very tall and high, leading to a new concept for the doors hinged on the roof instead of on the A-pillars. Thus, the Gullwing doors appeared on the market.

It was the first after-war season for sports cars, and the W194 won four out of five competitions. It did a triple-win in Bern, a quadruple-victory at the Nürburgring, a double at the 24 Hours of Le Mans, and another double at the Carrera Panamericana in Mexico. The only race it lost was at the Mille Miglia in Italy, where it came second and fourth. These achievements didn’t go unnoticed, and American businessman Maximillian Hoffman, who had very good connections at the top of the carmaker’s management, called for a production version.

That came in 1954, with the first series-version of the 300 SL race car appearing on the market: the W198. Like its predecessor, it sported the Gullwing doors and thick side sills that covered the spaceframe chassis. But, despite its hefty price, the carmaker did find 1,400 customers for the race-inspired coupe. At the same time, Mercedes-Benz unveiled the lower-specced 190 SL (W121). This one was designed as an elegant sports car with an open top. Its engine was only a mere 103 hp (104 hp), but could still reach 112 mph (180 kph).

Since the 190 opened the customers’ appetite for open-top luxury vehicles, they also asked for better performance. But there was a big problem: the thick side sill. Mercedes-Benz engineers worked on that and made them slimmer so they could put a regular door on the new roadster and ease ingress and egress. But under the hood was the same race-inspired inline-six with direct fuel injection initially developed for WWII military aircraft. It produced a whooping (for the time) 212 hp (215 PS).

But the carmaker was in an unusual situation: it had two roadsters similar in shape and size but with different engines and chassis, which increased production costs. It fixed that in 1963 when it combined both ranges and created the W113 SL, penned by Paul Bracq and Bela Bareny.

The hardtop design featured a concave roof inspired by Asian temples, which brought it the “Pagoda” nickname. Moreover, it was available with a wide choice of engines, ranging between 148 hp and 192 hp (150 PS – 195 PS). By the way, the latter featured a five-speed manual and could hit 200 kph (123 mph). 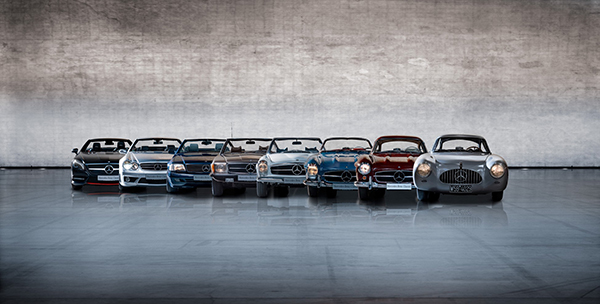 But the new model didn’t stay too much on the market, and the carmaker replaced it in 1971 with a new SL, the R107. This time, Mercedes-Benz fixed an important issue with coding the name. The R represented the roadsters, while the Ws used to be reserved only for the sedan versions.

The R107 lived on the market for an astonishing 18 years, with various and numerous updates. Moreover, the car received also V8 powerplants, which was a first. Then, all of a sudden, the Sport-Leicht (Sport-Light) was no longer all that featherweight, tipping the scale at up to 3,459 lbs (1,619 kg) for the 5.0-liter V8, SL 500 version with a four-speed automatic. But the model aged well and, helped by a few facelifts along the road, it made it until 1989 when the replacement came: the R129 SL, which was unveiled at the Geneva Motor Show.

Like its predecessor, the new model was kept on the market for more than the rest of the regular sedans within the carmaker’s stable. Mercedes-Benz produced the R129 until 2001 and marked the introduction of V12 engines under the hood. The most powerful was the SL 73 AMG, which had 517 hp (525 PS). Its original qualities of a fast, open-top GT were further enhanced. It helped the carmaker pass the 1990s economic recession and was replaced in 2001 by the R230.

The new model featured the power-retractable hardtop, named Vario roof, a system present in the Mercedes-Benz lineup for the first time on the SL’s little brother, the SLK. Nowadays, that’s not something unusual, but more than two decades ago, that was the hottest feature of a convertible. Customers expected more performance and more luxury from the German carmaker, which they received. They asked for AMG versions, and those accounted for a third of the model’s sales, while the top-of-the-range version was the SL 65 AMG Black Series that produced 661 hp (670 PS).

Last year, Mercedes-Benz introduced the seventh generation of the SL, the R232. It might be the last of its kind fitted with an internal combustion engine, and it is expected to be the first to feature a hybrid system that will help with the emissions.

Starting with 2030, the registration of ICE new cars will be banned Europe, so there are more chances that we’ll see the R 232 with an electric version as well. After all, it’s Mercedes-Benz we’re talking about. They’ve always been at the forefront of technology, as the EQS proves it.