Santo x Mercedes-Benz: The Making Of

While it’s not the fastest car ever created, the Mercedes-Benz 300 SL introduced us to one of the most breathtaking designs in the mid-1950s. It came with the spectacular Gullwing. The 300 SL coupe was only produced for three years from 1954 to 1957, the brand creating only 1,400 units. But it remains in history as one of the most iconic cars.

The Roadster, with conventional doors and a hardtop, was revealed in 1957 at the Geneva Motor Show. Mercedes built 1,858 units until 1963. 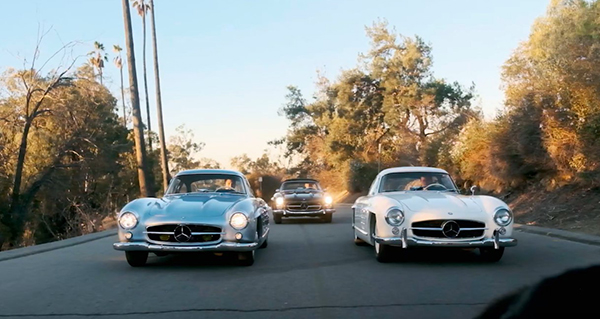 Afghan-American photographer and director Daniel Malikyar from Santo Gallery, who is only 27 years old, had the perfect vision on how to make the 300 SL shine in his collaboration with Mercedes-Benz. He took three examples, a 1954 and a 1955 300 SL Gullwing Coupe, and a 1963 300 SL Roadster, which are worth millions of dollars, on a coastal drive in Malibu, California, at sunset. A short film also captures the thrill of driving the vehicles, as well as the thrill of merely observing them.

Los Angeles-based Santo Gallery took the necessary precautions in order to protect the legendary vehicles and enlisted the police to shut down roads. They also had specialized drivers behind the wheel of the iconic cars.

Talking about his choice of muse, Daniel Malikyar shared via Robb Report: “Growing up, my dad drove an ‘86 E 300. There was something about the feeling, the smell, the sound of that car that connected me with Mercedes-Benz. To pay respect to the 300 SL was a gratifying culmination.”