The Mercedes 300 SL is a nearly un-attainable car for the average man. But that didn’t stop John Sarkisyan from pursuing his dream of not only owning, but fully customizing one. A fully cloned body, modern underpinnings, and a ton of custom work later – we have this W I L D build before your eyes.

Cloning a $1M Car? Mercedes 300SL With a Modern Engine/Chassis

At the 1954 New York International Auto Show, Mercedes-Benz introduced a radical new sports car named 300 SL. Inspired by the legendary W194 racecar that won the 24 Hours of Le Mans two years earlier, it was a design and engineering masterpiece.

Thanks to an aerodynamically efficient body that featured gullwing-opening doors and a 240-hp straight-six with a Bosch mechanical fuel-injection system, it could reach a top speed of up to 163 mph (263 kph), which made it the fastest production car at the time. 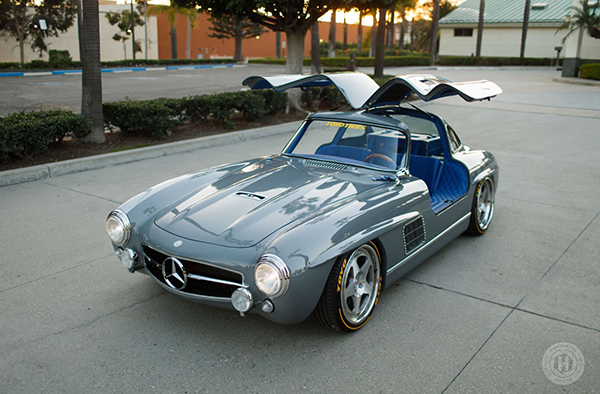 Without a question the best vehicle built in the 1950s and one of the most iconic cars of all time, the 300 SL is now a sought-after collector’s item, with examples in great shape being auctioned off for more than $1.5 million. Even a wrecked one is worth several hundreds of thousands, and anyone who gets their hands on one usually restores it to its original condition.

So, the obvious question that comes to mind as soon as you see this eccentric build is: why on Earth would someone tune the heck out of a 300 SL? 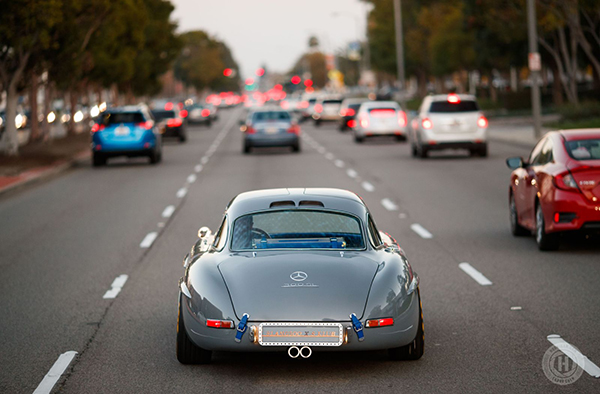 Although John Sarkisyan (a.k.a. Slang500), an artist and owner of S-Klub LA, is a huge fan of this iconic Mercedes, having one tattooed on his arm, he didn’t have the heart (or the money) to modify an existing Gullwing, but instead built a custom one from scratch.

Famous automotive photographer Larry Chen visited him a few months after the SEMA show concluded, gaining some insight about the wicked vehicle, and taking the awesome shots featured in the gallery. You can watch the entire encounter in the Hoonigan AutoFocus video below.

Determined to build his dream ride without harming an original model, Sarkisyan recruited Jon Sibal to help him create a 3D rendering and managed to convince a 300 SL owner to let him disassemble the treasured car. By doing that, he created molds of all 33 body parts, flawlessly replicating them from fiberglass. He added some authentic Mercedes parts like the windshield or rear window, but most of the chrome trims were also custom built. 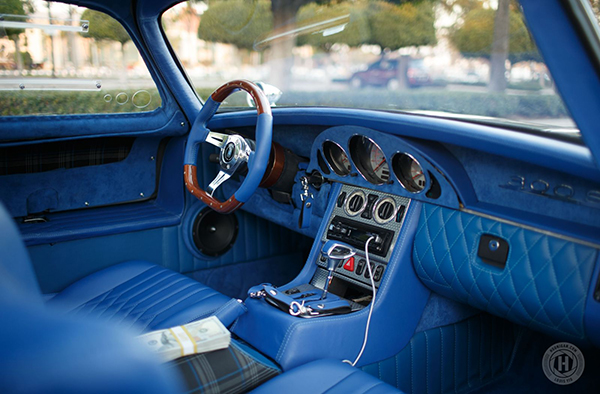 He wanted to create a unique vehicle that combined the authentic 1950s design with modern tech and a touch of his typical outlaw style, so instead of reproducing the 300 SL’s steel chassis, he used one with the same wheelbase from an R170 SLK.

The donor car was actually the most capable of all first-generation SLKs, the 32 AMG, therefore its 3.2-liter supercharged V6 became the heart of the outrageous Gullwing. It was sent to the engine wizards at NeedsWings for a complete overhaul that helped it make around 400 hp and mesmerize those who got to peek under the hood, with its copper-painted components.

For the suspension, a KW kit was used, and the stock AMG brakes were swapped with a Brembo high-performance system that included a set of 2-piece cross-drilled rotors. They are hugged by red calipers with six pistons at the front and four at the rear that visually pop out behind the HRE 305 wheels wrapped in Toyo tires. 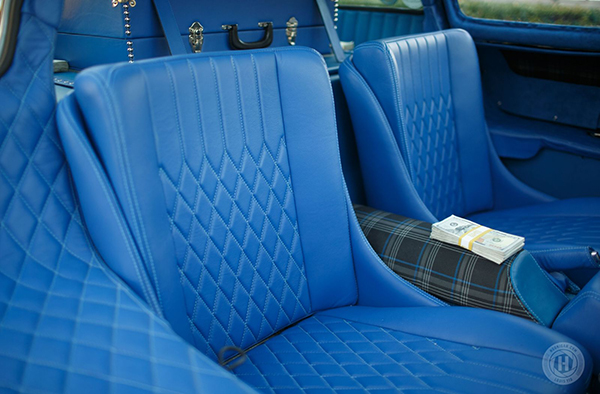 The masterful mix between old and new continues inside, where an abundance of quilted blue leather and suede contrasts the metallic silver exterior paint. Although reupholstered, the seats are original, but the rest of the elements were custom-built, integrating several features from the SL 32 such as the instrument cluster which was moved to the center of the dash, above a console that incorporates the AC controls and shifter.

Even the 300 SL’s iconic suitcases were recreated. The one strapped behind the seats hides a huge subwoofer, while one of the two located in the truck is packed full of $100 stacks. Since building this car must have cost almost as much as a decently preserved original, the money inside the cases is of course fake, being sourced from a Hollywood studio.

Even though an original 300 SL wasn’t harmed during the development of this build, there are still purists who argue that this car is as profane as mixing a Beethoven sonata with a Tupac Shakur song. But, as long as such an improbable combination sounds good – or, in this case, looks good and soothes the soul of some, it fulfills its purpose as a work of art, even if others will find it ludicrous.

As much as one respects the real thing, it’s hard not to appreciate the amount of work and attention to detail that has been put into this exceptional build. It is undoubtedly one of the most unconventional yet unbelievably cool custom Mercs we’ve ever seen.