Mercedes-Benz and parent automaker Daimler didn’t walk away from World War II unscathed. It was then-Daimler Chairman Wilhelm Haspel’s idea to take the Mercedes-Benz division back to motorsports in an effort to begin rebuilding the storied company. 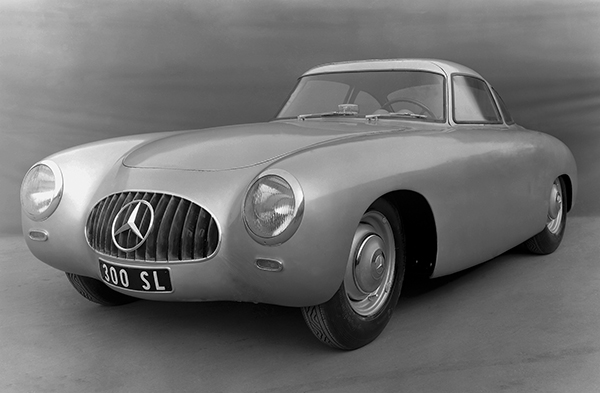 Enter the W194. The brand’s first new sports car after the war, the W194 coupe finished second in its first race the Mille Miglia. It then went on to win the Bern Sports Car Prize, the famed 24 Hours of Le Mans, and the Carrera Panamericana. While the W194 quickly became a decorated machine, it was not the Mercedes-Benz 300 SL.

Instead, a prominent New York-based importer of European luxury vehicles named Max Hoffman suggested Mercedes-Benz needed to create a limited run of cars in the spirit of the W194. A year after the W194 took the world by surprise in motorsport, Mercedes-Benz’s General Director Fritz Konecke gave the order for 1,000 sports cars. Thus the 300 SL was born. 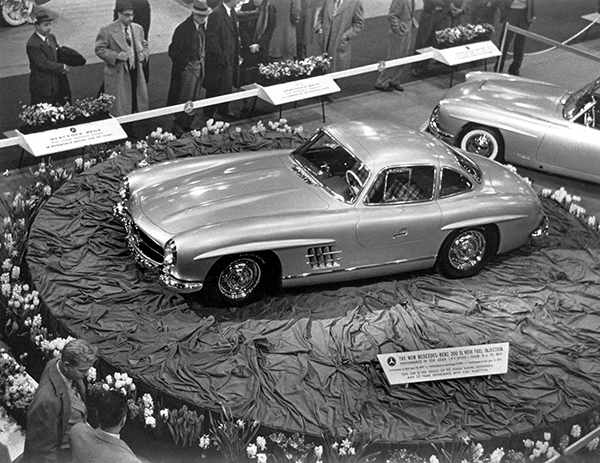 In 1954, Mercedes-Benz revealed the W198-generation 300 SL at the International Motor Sport Show in New York. While an auto debut in New York isn’t strange today, it marked a shift for Mercedes-Benz. Typically, the German company revealed its cars at home or at the Geneva motor show. However, Hoffman convinced the luxury automaker it would be a grand idea to woo American buyers with a New York debut.

They concurred, and suddenly, Mercedes-Benz had a hit on its hands. The 300 SL bowed as a coupe with a 3.0-liter overhead cam inline-6 engine. Yet, the 300 SL wasn’t only a sports car to change perceptions, it was a technological marvel.

The engine ditched carburetors in favor of a Bosch-developed direct-fuel injection system. Recall, fuel injection was rare at the time and higher pressure direct injection wouldn’t become the standard for decades to come. The system helped boost power well over the W194 to 215 hp at the 300 SL’s launch. The race car made do with 175 hp. An upgraded camshaft option boosted output to 240 hp. The top speed could top 160 mph, making the 300 SL the fastest production car in the world.

Mercedes built the 300 SL on a spaceframe or “birdcage” chassis. It featured a separate welded steel body, but the firewall, hood, doors, trunk lid, rocker panels, and floor and belly pans were aluminum. 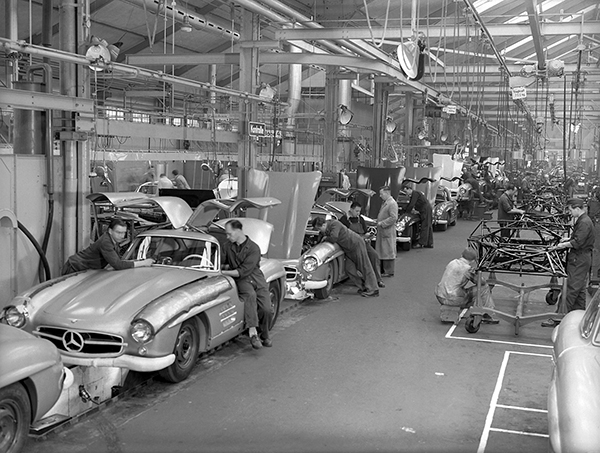 These advances, combined with radical “gullwing” doors and curvaceous body lines, helped turn the page for Mercedes-Benz. The company not only made stately luxury vehicles, but it was also capable of producing incredible performance machines.

A total of 1,400 300 SL coupes were built from 1954 to 1957, and 29 of them were lightweight models with all-aluminum bodies that helped shave 187 lb. The 300 SL coupe gave rise to the 300 SL roadster in 1957, which remained in production in its first generation until 1963. Its successor still exists today and is now in its seventh generation, sold as the Mercedes-AMG SL.

Like so many areas of the auto industry, some of the best things came from motorsport. Without a renewed commitment to racing following WWII, we may never have received a car like the 300 SL. And without the 300 SL, there may not be such a lineage of world-beating sports cars from Mercedes-Benz.