Barn Find Mercedes Benz SL R107 survivor – Will its V8 start? For this barn find, the car in question is a Mercedes built during what is widely regarded as the finest era for German robust engineering and build quality. Having owned a handful of 1980s era Mercs, and upon discovering the car was languishing only a few miles from where Jonny was born and raised, he had to film this convertible garage find.

The Mercedes-Benz SL R107 is a two-seater V8 sports car with a detachable roof developed and produced by Mercedes-Benz between 1971 and 1989. According to experts, units from this era were regarded as the finest in robust German engineering and build quality.

The Mercedes-Benz R107 was perhaps the most extended single series ever produced by the Bavarian automaker after the G-Class under SL (R107) and SLC (C107) nameplates.

These nameplates were developed for the American market and came with specialized engines, bumper designs, headlights, and emissions management. About 204,373 units were sold in North America, of the total 300,175 produced.

Smith’s find was an American model that had somehow found itself back in Europe. The owner’s parents bought the 1981 Mercedes-Benz R107 380 SL while living in America in the 1990s.

According to Derrick, the owner, his mum always wanted the ‘Dallas spec’ SL, and in 1995, they found one for sale in a copy of Auto Trader.

In 1999, Derrick’s parents moved back to Europe with their car and settled in Munich. 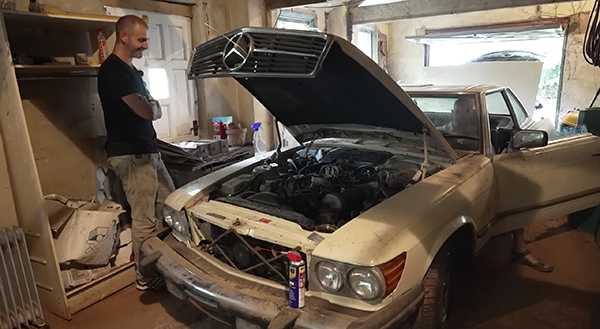 “In 2000, they moved to Brussels, and they took the car with them to Brussels, but then, they parked it in a garage, and basically it didn’t move after that point,” he explained.

Firstly, they weren’t the most powerful (Euro Spec had a completely different engine). They also had a weak timing chain (single-row cam chain) and were prone to breaking down.

Smith and the owners tried to get it to run but failed. It’s not a complete bust, the engine seems healthy. It turns but fails to fire.