While the last generation Mercedes SL was more an open-top S-Class with just two seats, the new one goes back to its roots as a sports car. Still comfortable, mature and better behaved than an AMG GT, it’s certainly shaping up as a more engaging car to drive. 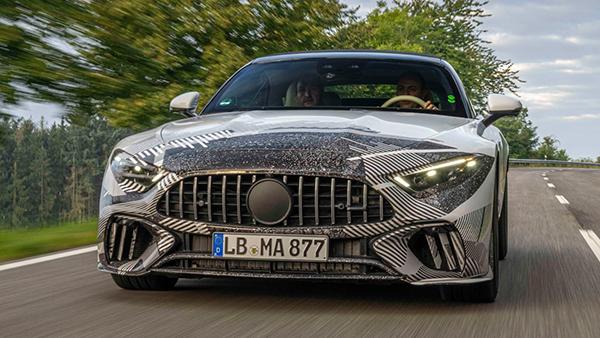 Our chauffeur on a not particularly drop-top friendly morning in the Eifel mountains is AMG Chief Technology Officer Jochen Hermann, who is sitting behind the wheel of the next-generation Mercedes SL before its official reveal in October.

Not only has Mercedes decided a bold reinvention of this famous model, it’s also the first time AMG has developed a car entirely for the core Mercedes brand. 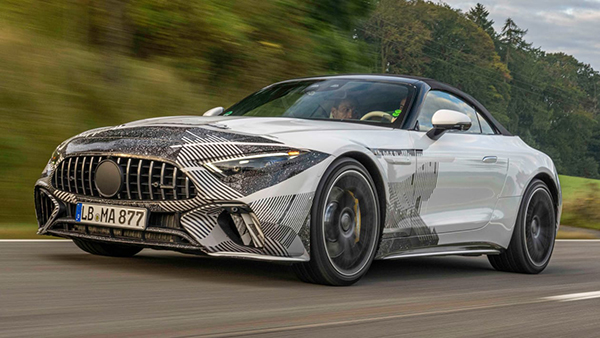 The SL has dwindled in importance over its last two generations. That’s the reason why AMG has pushed the reset-button and taken the SL back to its roots, or at least, a little closer to what once was considered the best sports car in the world in its heyday.

The transformation begins with the return of the canvas roof instead of the folding hard-top, for better proportions, a more traditional style and weight saving. It wraps over the 2+2 cabin complete with two small booster seats in the rear, more suitable as additional storage space more than anything else, at a glance. 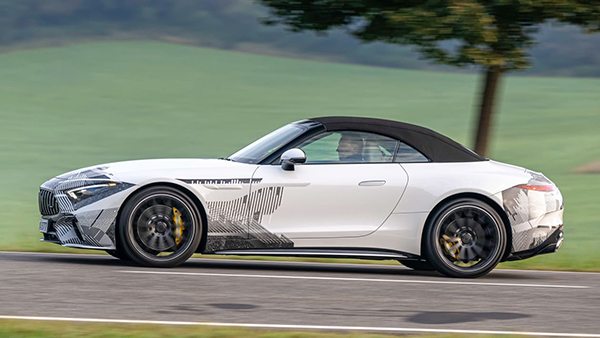 “We have started from scratch”, Hermann says. The engines are from other AMG models, and the interior looks similar to that of the latest S-Class with its new portrait style MBUX infotainment system. But the platform is brand new. The SL is not just an extended AMG GT in a tailored suit, as it uses a new aluminium-space frame chassis with a different layout.

To open up space for the 2+2 layout, the transmission has been moved to the front and works right behind the engine. The driving position is virtually in the centre of the car. That’s beneficial for visibility and manoeuvrability, and more befitting of the SL’s brief as an everyday sports car.

You can already feel the progress from the passenger seat: what was once a walloy experience is far more focussed, grippier and free of body roll. But it does this without sacrificing ride quality. While an AMG GT feeds every little bump into your seat, the SL soaks in all the irritations from the road and gives you a smooth cruise. No rolling and no bumping – just solid at any speed. Only in Sport Plus mode you can feel the dramatically increased stiffness of the body. 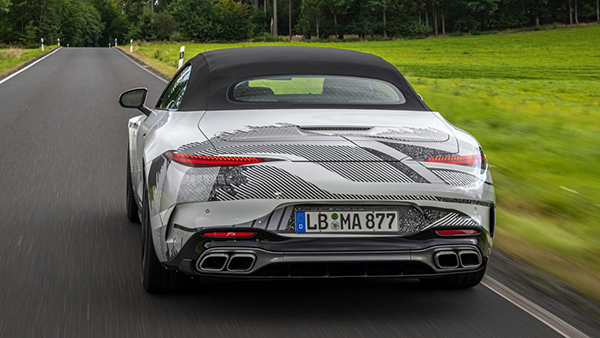 The same goes for the steering, which Hermann describes as precise and predictable without being nervous or over responsive. On the long and winding roads leading up to the Nürburgring he does not have to work the wheel too hard to get the SL flowing nicely. It looks like a far calmer driving experience than the GT.

But the biggest surprise is the turning circle: thanks to the new all-wheel steering the roughly five-meter long SL turns almost like a hatchback. Even a C 63 might not spin around so easily.

Hermann won’t talk about the engine, but the exhaust note is that of the 4.0-litre V8 we know from so many AMG-Models. Even if it does not sound as aggressive as in the GT for example, power feels around 600bhp or more in our SL 63 S prototype. 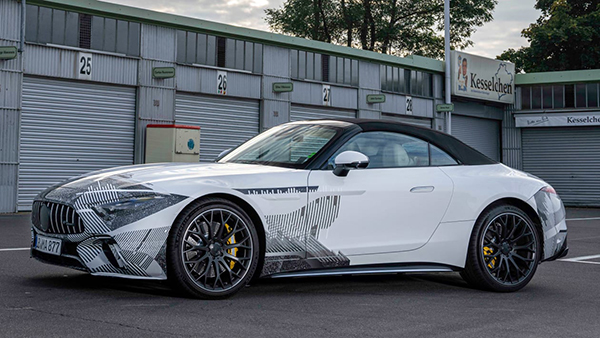 Though unconfirmed, it’s expected that the range will open with a six-cylinder SL 43 and 53 pair starting with around 400bhp, leading up to the 63 S. Plug-in hybrid power is possible later down the line, and Hermann doesn’t rule out a fully electric version in the long term. “We have some experience in that field”, he says, while referencing the SLS eCell.

While he obviously is already thinking of electrifying the SL, one option is off the table completely – a V12 version won’t happen for weight and CO2 rules. “Even if we would consider this option, the engine just wouldn’t fit under the bonnet,” he says, dashing any hopes of a return of the SL 65 or SL 73.

The new SL will also affect other model-lines, Hermann admits: The S-Class convertible has already been discontinued and the AMG GT Roadster will have no successor.