Mercedes-AMG test drivers are taking advantage of winter’s last stretch to put the next-generation SL through its paces. They’re in charge of fine-tuning the roadster because it will exclusively be sold as an AMG model, and they sent some of their development prototypes to a frozen part of Sweden because all-wheel-drive will be available. 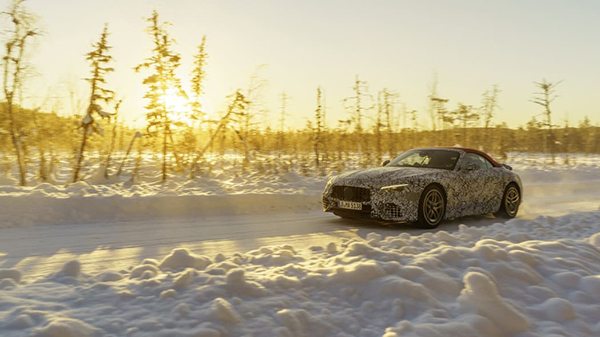 Called R232 internally, the eighth-generation SL is being finalized nearly 70 years after the original model made its global debut on the German autobahn. Putting miles on test mules was much easier in the 1950s, decades before anyone with a smartphone and a well-trained eye could become a spy photographer. In 2021, finishing the SL’s development requires shipping fully camouflaged prototypes to a private test track in a remote part of Sweden.

No amount of camouflage can conceal the next SL’s proportions, which are characterized by a long hood and a short deck lid. And it’s evident that the roadster is ditching the current model’s power-folding hardtop and returning to the power soft top last offered on the R129 model built until 2001. The top is offered in black and red, among other colors. Finer design details (like the shape of the lights) are still hidden under the black and white wrap.

Mercedes-Benz confirmed that, for the first time, the next SL will only be available in AMG-tuned variants. It did not release technical specifications, however. We’re hoping to see the V8 engine return, and it’s reasonable to assume that more affordable variants will receive a straight-six engine. Some degree of electrification looks inevitable.

Rear-wheel-drive will likely come standard, but another first on the specifications sheet is the availability of 4Matic all-wheel-drive. Sending power to the four wheels will turn the SL into a year-round driver for many enthusiasts.

Mercedes-AMG will continue testing the next-generation SL in the coming months, notably by letting it loose on the Nürburgring track in Germany. It explained that its goal is to make the R232 much sportier than its predecessor. We’ll have a better idea of what the transformation entails when the 2022 SL makes its public debut later in 2021