Remember when ‘Pimp My Ride’ was the bomb and ‘you’ve officially been pimped’ was part of your vocabulary? This writer is actually embarrassed that he used to be fascinated by some of those builds back in the day. But hey, that’s car fashion in a nutshell. 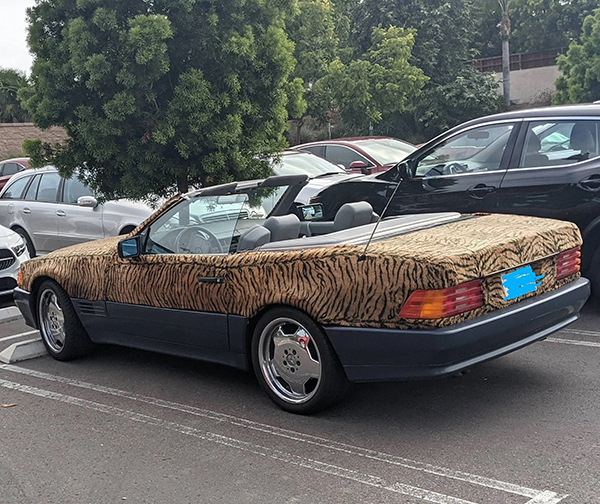 So, what does this old Mercedes-Benz SL have to do with the discontinued show that was presented by Xzibit? Why, that would be absolutely nothing. Nonetheless, it does look like something Alvin Nathaniel Joiner (yes, that’s Xzibit’s real name) would gladly introduce.

Smelling like bad decisions, as a Redditer put it, this R129 SL has embraced its feline side. The tiger pattern replicated onto the fabric covers the whole top end of the car, which includes the hood, front and rear fenders, doors, trunk lid, and even the A pillars. The bottom end remains stock, and if you look closely, you will see that the original wheels have been chromed.

Besides that weird wrap [insert furry joke here] and shiny alloys, the roadster, which can be considered a modern classic, as it was built from 1989 to 2001 at the Bremen factory in Germany, looks rather good. It sports seats wrapped in grey leather, typical of cars made in that era, and appears to be in decent overall condition. Yet that didn’t stop the owner from giving it a very controversial makeover.

With well over 210,000 units of the R129 generation Mercedes-Benz SL estimated to have seen the light of day, it’s not like they ruined a rare and head-turning ride. Also, it’s not that valuable either, as one could buy such a car for a few thousand dollars at any given moment, as long as it’s not an AMG or a very low-mileage and well-preserved example, as those do have six-digit price tags attached to them.