Earlier this month, we shared a batch of photos showing a prototype of the next-generation Mercedes-Benz SL testing on public roads in Germany. Today, we bring you a spy video of the very same prototype shot at the very same location so that you can hear the engine and exhaust notes.

Two things tell us this is indeed the same prototype we spied earlier in October. The registration plates match perfectly and so do the different sets of wheels front and back. In this spy video, you can witness the test car cruising around smaller towns and intercity roads in Germany being put nowhere near its limits.

Still, a few of the more aggressive accelerations give us the chance to hear the engine that’s under the hood. It’s difficult to determine what’s hiding there but judging by the sound of it, it’s most likely a six-cylinder mill. The exhaust note is pretty throaty but bear in mind the car is being developed in cooperation with the AMG division so it’s probably going to feature many performance upgrades over what you’d expect from a standard SL – including a sports exhaust system. 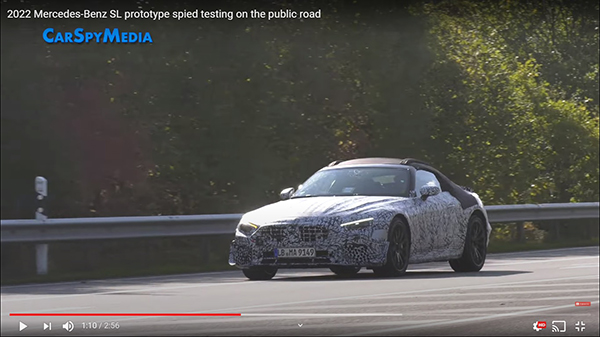 Speaking of AMG, the range-topping SL 73e AMG 4Matic model should be a real rocket reportedly powered by an electrified system consisting of a 4.0-liter V8 supported by an electric motor. That’s definitely not the powertrain in this prototype.

While still heavily camouflaged, the model is already showing some of its design characteristics. The automaker has already confirmed the proportions will be heavily influenced by the original 300 SL and the roadster will switch to a fabric roof – and this is already seen here.

Despite the teasers released earlier this year, there’s no exact launch date announced from Mercedes yet. We believe the new 2022 SL will debut at some point next year with sales likely to begin during the final quarter of 2021.