The new Mercedes-AMG SL is expected to debut later this year. Recently, the car was spied while undergoing testing on the busy roads of Beverly Hills.

According to the vlogger who caught the AMG SL in action, he was in the middle of filming a video about the Mercedes-AMG C43 when he luckily chanced upon the high-performance luxury convertible. From there, the source tailed the auto for probably a few minutes until it made a turn in an intersection. The prototype can even be seen sporting a Californian plate number. 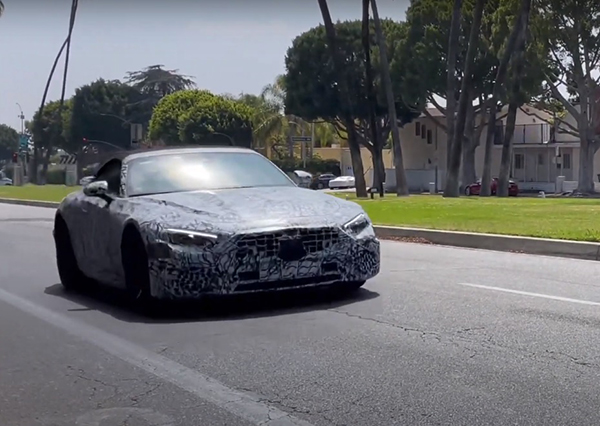 The AMG SL appears with the same level of camouflage as its previous sightings. Among the noticeable features of the car include a soft top in black, quadruple square-tipped exhausts, thin taillights, thin brake lights on the boot lid, narrow headlamps, and a front grille with what looks like vertical slats.

Previously, AMG CEO Philipp Schiemer confirmed that they have taken the helm in the development of the SL. That means the range will no longer have derivatives in the Mercedes-Benz line. The vertical front grille and design of the tailpipes further support the test vehicle’s AMG identity.

The next-gen AMG SL’s base model will likely carry a 2.0-liter engine while its range-topping trim might get a 4.0-liter twin-turbo V8. The power units will probably have a hybrid setup that will provide them at least 400 hp up to as much as 800 hp.