Mercedes-Benz allowed its legendary SL-Class a bit of independence as Mercedes-AMG took over the seventh generation. Its newfound performance exclusivity will further strengthen the pride of the flagship. 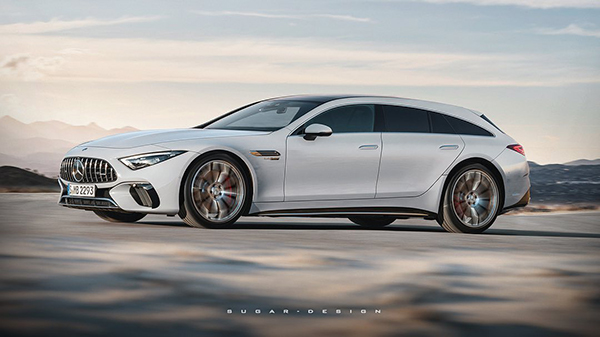 And now all we must do is wait for the R232 to become a fully-fledged model series. Although at the moment it only consists of a Roadster version, we can all imagine the new SL-Class will slowly and steadily take over the duties performed today by AMG’s GT series.

After all, it’s already been showcased as SL 55 and 63 versions, with plenty of further room to grow beyond the current 469 hp and 577 horsepower AWD variants. An SL 63 S will probably be the next logical OEM step forward, and hopefully one day we are even going to ogle at a possible Mercedes-AMG SL Black Series.

Before that happens, though, it’s also natural for the automotive virtual artists of the imagination world to give us their two cents on the matter. Some go for the safest derivation possible, an SL Coupe, while others dared to venture into the unconfirmed AMG possibilities – even imagining the potential SL successor of the AMG GT 4-Door Coupe.

That happened not long ago, courtesy of Sugar Chow – the pixel master better known as sugardesign_1 on social media. Oddly enough, he took a break from his “Touring the world!” series of making everything that’s hot a station wagon to deliver the possible stylish SL 4-Door – aka (don’t call it a) sedan.

Funny enough, one of his followers even asked about the possibility of making it into a “shooting brake.” And we have news for the fan: the pixel master quickly obliged. Sure, the idea of seeing the 2022 Mercedes-AMG SL turned into a Shooting Brake doesn’t make too much sense in the real world.

That would be when considering the existence of the CLA Shooting or the retirement of the second-generation CLS Shooting Brake. But in the virtual environment populated by this artist’s projects, the SL morphing into (don’t call it a) station wagon is full of rationale. Even only because of the long-running series’ consistency if nothing else springs to mind.