The future Mercedes SL is going in a new direction. It will be developed by AMG, will have up to 800 HP and a 2 + 2 seater configuration with textile roof. After several spy photos, Mercedes-AMG also published the first photos on the street. Recently, Mercedes SL was caught in the first spy photos on the racetrack. 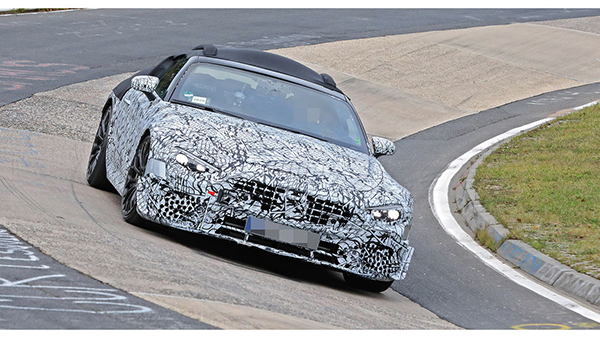 As we have informed since March 2020, the new Mercedes SL is being developed by the AMG division in Affalterbach. After the digital design period, dinamic tests began. Mercedes-AMG informs that “Following extensive digital development steps, test stand runs and simulator trials the new sports car is now entering a scheduled phase of wide-ranging dynamic driving tests – thus far at the Group’s own Test and Technology Center in Immendingen – and now also on public roads in some cases”.

The new Mercedes SL will be much sportier than the current model but will continue to offer a high level of comfort corresponding to a luxury GT. Because the future Mercedes SL is developed on the same platform as the AMG GT, Mercedes wants to avoid cannibalizing the two models.

Thus, Mercedes SL will have a 2 + 2 seat configuration with textile roof while AMG GT Cabrio will keep the solution with 2 strict seats. The AMG GT will continue to be the uncompromising sports car while the Mercedes SL will offer more comfort.

From the first camouflaged photos you can see the new design: the Panamericana front grille framed by narrow headlights. The sideline of the windows rises to the rear and the mirrors are mounted on the doors. In the rear you can see the four rectangular exhaust pipes and the long and narrow taillights.

We cannot know the configuration of the textile roof because it is still strongly camouflaged.

The new architecture has a high percentage of aluminum, being very light and is very flexible both in terms of body types and propulsion types. The new platform will use the transaxle system with the engine located in the front and the gearbox mounted on the rear axle, the transmission being made by means of a carbon cardan shaft.
This constructive solution also allows the electrification of the range and we have already announced that Mercedes has already registered the name Mercedes-AMG SL 73 e.

The new Mercedes SL will be codenamed R323 and its top version of the Mercedes-AMG SL 73 e will be powered by a 4.0-liter twin-turbo V8 engine and an electric motor that will deliver 816 HP together. This hybrid system was already presented on the Mercedes-AMG GT Concept at the Geneva Motor Show in 2017 with the occasion of the 50th anniversary of AMG.

Power will be transmitted to all four wheels through the 9-speed automatic transmission. For optimal traction, the rear axle will have the Torque vectoring system. auto motor and sport magazine speculates that Mercedes-AMG SL 73 e will also have full steering. Suspension, brakes and exhaust system are significantly modified compared to the normal SL models and adapted to the increased performance. 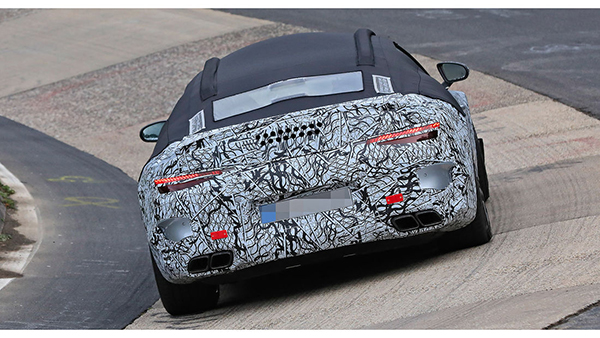 Mercedes-AMG SL 73 e will be the top version. But what about other engine versions? The basic version SL 43 will be equipped with the new 3-liter turbo 6 inline engine with mild hybrid technology that will provide at least 390 hp as in the current C 43 AMG. Then comes the SL 53 with the same three liter 6 inline and a minimum of 435 HP. Then, the SL 63 mild hybrid with 4.0 liter bi-turbo V8 will deliver about 640 HP. The V12 version will disappear and will survive only in the S-Class Maybach.

The textile roof and the high percentage of aluminum will substantially reduce the weight. Our estimates are that the future SL with the base engine will have less than 1.t tone. The current generation SL (R231) weighs between 1730 and 1845 kg.

Inside, the Mercedes SL will have multi-adjustable sports seats, the new sports steering wheel launched on the E-Class, digital cockpit and a the second generation MBUX multimedia.

Mercedes changes strategy. Give up the luxury S-Class Coupe in favor of a GT with certain sporty qualities. The future Mercedes-AMG SL promises to be a sports car that will retain the comfort qualities of a GT.