The SL is arguably the most famous Mercedes-Benz nameplate. It is, without a doubt, its longest-lived. While the S-Class and the E-Class can trace their roots back further, the cars they draw upon weren’t named S or E. The SL has always been the SL, sport leicht (lightweight sporting) in the parlance, even if only in name, since American Benz importer Max Hoffman recommended the brand produce a consumer version of its radical gullwing-doored Grand Prix racer, back in 1954. Its design has also, unlike the Porsche 911 (but like the Chevrolet Corvette), evolved with the ages, to always be au courant and exemplary of its time. 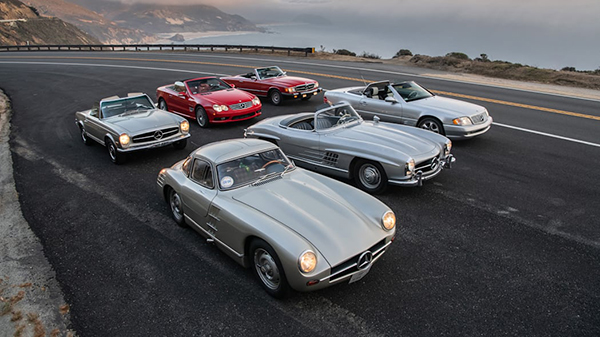 With the seventh-generation SL preparing to reveal itself later this year, Mercedes took the opportunity offered by the recent Pebble Beach Concours d’Elegance to showcase this extensive model history, by rounding up a selection of five, pristine, vintage SLs from its heritage collection that’s normally housed in the Mercedes-Benz Classic Center in Southern California. Because another journalist was taking his sweet-ass time exploring the back roads of the Monterey Peninsula in the W113 (1963-1971) and ran far over his allotted slot, I only had the chance to drive four of them. I know, poor me. But that was still enough demonstrate why the SL has survived and thrived for seven decades.

SL 55 AMG (R230, 2001-2011)
I started with what may be the nadir of the SL lineup, and the Mercedes brand in general in the Aughties, with this 2003 SL 55 AMG and its supercharged 5.5-liter V8 that put out nearly 500 hp. True to its era, though, there was something chintzy and disappointing about the interior appointments of this low-mileage, red-on-red roadster. And while its design is more cohesive than the current, soon-to-be-replaced SL, that isn’t saying much. It was, after all, the only SL to get a substantial mid-cycle re-style — not that it improved things. Still, there was something heaving and direct in how it drove. I’m just glad I didn’t have to try to decipher the sticky, plasticky buttons that littered the interior. 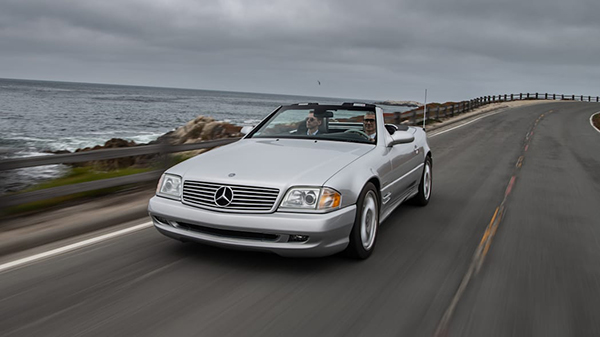 SL 500 (R129, 1989-2001)
What a difference a year makes. This 2001 SL 500 was an immaculately preserved executive car, with just over 5,000 miles on its odometer, and it felt every beat a creampuff. Outfitted in rare “Silver Arrow Edition” with classic German Racing Silver paint, and silly period-correct BBS wheels, it was the pinnacle, and farewell, version of this generation of SL, appropriately calling back the nameplate’s heritage. With just over 300 hp from its 5.0-liter V8, it wasn’t exactly a tire squealer, especially since it adopts the whiplash-free vintage Mercedes trait of starting in second gear. But if you clunk the notched shifter down into 1 and work it through the gears, it will respond. Analog, handsome, and representative of a time when Mercedes engineers competed in teams to create the best solutions, regardless of cost, it feels as vault solid at 20 as it will at 50. 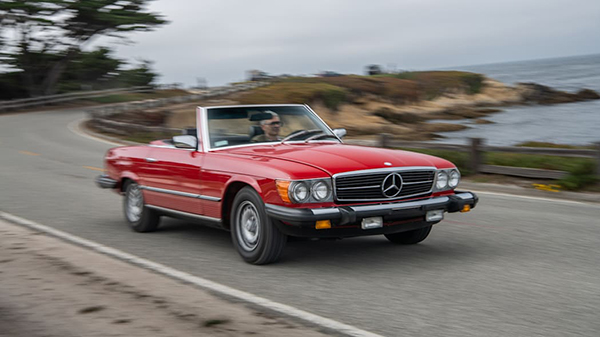 380 SL (R107, 1971-1989)
In the 1980s, Mercedes decided that what its American buyers needed was an emission-choked 3.8-liter V8. With an output of just 155 hp, this engine produced fewer horsepower than any other SL we drove. But somehow that didn’t bother me. This generation of SL has all the relevant signifiers of a true classic creampuff, including a steering wheel with a diameter that approximates that of a manhole cover, and a steering box that magically eliminates any road feel. Driving it recalls the experience of piloting a Buick Reatta, impossibly light and floaty, though its obviously far more stolidly built than anything produced in Lansing. I was not in a hurry behind the wheel, and neither should you be. The eternal signifier of discreet wealth, buy one before they’re unaffordable, and you will always be guaranteed a valet parking spot at the front of every lot. 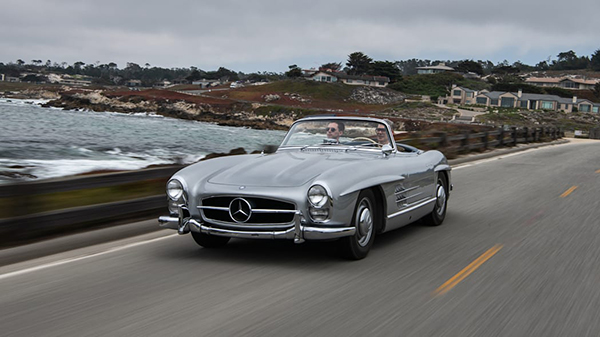 300 SL Roadster (W198)
I saved the best for last. Though removing the roof from a Gullwing eliminates the eponymous avian flapping doors, it does nothing to diminish the sheer alien outlier status of this car. In 1957, this convertible had a racing-derived, direct-injected, four-stroke engine, the first in a production vehicle. Its straight-six made 215 hp, and, with the only manual transmission of any of the SLs we drove, I could make use of every pony on the back roads of Pebble Beach. Cars like this actually would have raced in the mid-century course here. Shoving this $1.3 million roadster through the four notches in its ivory-ball-tipped gearshift was as delightful and rewarding as any driving experience I’ve had, a magical experience of a blue chip vehicle that begs to be mistreated. Turning the un-assisted ivory rimmed steering wheel provides a decent upper-body workout. Touching any piece of switchgear— knurled and ponderous as anything invented by Dr. Frankenstein — makes you feel connected to the earth from which the metal was mined. It’s not a screamer, but it rewards practiced and effortful driving with something beyond satisfaction. I hope the new SL has one-tenth of its innate, improbable charm, and its sheer sense of marvelousness.