Mercedes has announced the electrification of the AMG, Maybach and G-Class subbrands. The first AMG full electric, Mercedes-AMG EQS 53 4Matic + was presented at the Munich IAA autoshow. Other versions AMG 43 and 53 will follow for EQE and EQA. But what do you think of a future Mercedes-AMG SL electric roadster as a rival to the future Tesla Roadster? 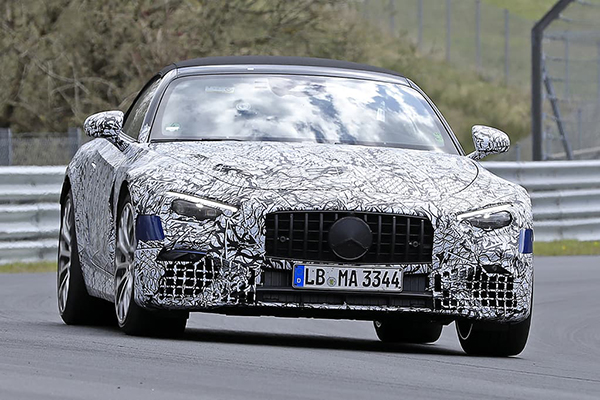 At a time when the convertible and roadster segment is in sharp decline, a statement by Markus Schafer, COO Mercedes-Benz cars ignites the hopes of fans:
“When you think of AMG and make AMG an electric brand, then we definitely think of a convertible too. It would be a very attractive and emotional product that would add to the brand. We have to think about it and develop an electric car as a roadster, “continued Schäfer. Even if a “good-looking electric convertible is not that easy to build”.

But an electric roadster is very difficult to build because the large weight is a serious obstacle to the dynamics required for such a model.
Theoretically, Mercedes would have two solutions:
– adaptation of the new MSA (Modular sports car architecture) platform for electric propulsion. Until now, the current SL was based on the shortened E-Class platform, but it did not offer the necessary premises for a top dynamic. That’s why, despite shrinking demand in the roadster and convertible segment, Mercedes has developed a dedicated platform called MSA. And to make this platform profitable, it will also use it for the future AMG GT.

This platform also supports PHEV versions called E-performance in combination with 4 or 8 cylinder engines. The rear axle is electrified, a 204 HP and 320 Nm electric motor directly acting on the rear axle through a 2-speed gearbox. Theoretically, the platform could be used for electric propulsion with a rear axle motor.

– the use of the MEA platform (modular electric platform) from EQS and EQE which is a dedicated electric platform. Mercedes has already presented at the Munchen IAA autoshow the first electric AMG, AMG EQS 53 4Matic+, built on this platform that has integral steering and adaptive air suspension AMG Ride Control.

But in this case there are two problems. Does the 107.8 kWh battery fit on a platform with a shortened wheelbase? How will the roadster handle such a large weight? EQS 580 4Matic+ with 107.8 kWh battery and two electric motors weighs 2585 kg. It’s much too much for a sports car. One option would be the AMG SL electric to have only an electric motor in the rear and a smaller battery. But will it provide sufficient range?

We do not know what decision Mercedes will make but these speculations are beneficial for AMG’s image. An AMG electric roadster would be an image model to demonstrate AMG’s ability to innovate in the top electric roadster segment as well. But the mission is not easy because the weight is a terrible obstacle for a pure sports cars.