If you take the Mercedes EQA in isolation it appears to offer all you could want from an upmarket small SUV: it brings the expected air of quality and refinement, a first-rate cabin and the all-important infotainment and tech systems that buyers demand. Plus, the EQA looks reasonable value, particularly when compared to its painfully more expensive EQC sibling. 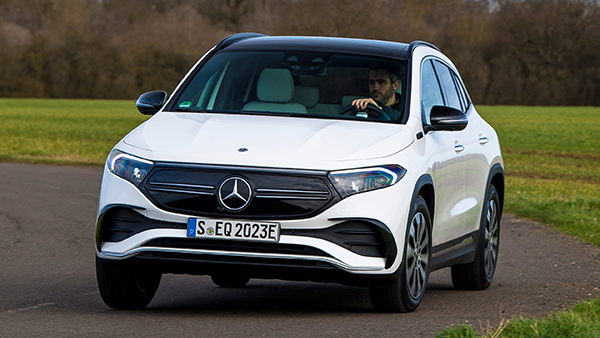 Buyers seeking the best overall package, however, will no doubt be tempted by rivals such as the Ford Mustang Mach-E and Volkswagen ID.4, both of which provide more space, better range and entry prices that undercut the EQA.

If you really want the three-pointed star on your drive, then the EQA is a perfectly fine choice, but just make sure it works for your needs, and that you can live with some of its compromises, before you buy.

About the Mercedes EQA
The electric revolution is now rapidly gathering pace, moving towards the 2030 date when manufacturers will no longer be permitted to sell new petrol or diesel-powered cars in the UK.

Following the introduction of its all-electric EQC SUV in 2019, Mercedes is now fully into its stride with its battery-powered EQ range incorporating the smaller EQA and EQB SUVs, the EQV premium MPV and the EQS luxury saloon.

Based on the combustion-engined GLA model, the all-electric EQA is similarly styled to Mercedes’ smallest SUV, with the most telling signs that you’re looking at the battery-powered car being a blanked-off grille, full-width light bars at the front and back and the rear number plate positioned below the tailgate.

Being so closely related to the GLA is no bad thing – we named it our Small Premium SUV of the Year in 2020, with the in-car tech systems that also feature in the EQA being highlighted for special praise.

However, the EQA will be up against some serious EV competition in the shape of the Volkswagen ID.4, Ford Mustang Mach-E, Volvo XC40 Recharge P8 and Tesla’s Model Y SUV. In addition to decent practicality, range and performance, all these rivals bring bags of kerb appeal to make the decision for buyers even more difficult.

Priced from around £44,500, the EQA doesn’t qualify for any government grant to help reduce the on-the-road cost, although the range doesn’t include an ‘entry-level’ trim as such, so you benefit from a decent level of standard equipment.

Upgrading further to the Premium and Premium Plus packs adds bigger wheels, a panoramic glass sunroof, an upgraded audio system and a wireless smartphone charging function among other luxury features.

All EQA versions use a 66.5kWh battery but there are three different power outputs available. The EQA 250 produces 187bhp, above that sit the all-wheel-drive EQA 300 4MATIC and EQA 350 4MATIC variants, delivering 225bhp and 288bhp respectively.

The roots of the EQA can be traced back to the GLA compact SUV and it would seem that Mercedes has prioritised comfort and refinement for the electric car, rather than aspiring to deliver too much in the way of sporting ability. Decent levels of regenerative braking mean that you can drive mostly with one pedal, which makes trips around town a little easier, too.

The EQA handles in a predictably safe and secure fashion, but the light steering lacks feel and the car is inclined to wallow through the twisty stuff. It means that keen drivers won’t particularly relish time behind the wheel.

All EQA models come with Mercedes’ Comfort suspension, although there is the option of upgrading to the Premium Plus trim which features adaptive dampers to help deliver a more spirited drive. That said, this tech fitted to our test car had little impact on the EQA’s driving dynamics, and we’d generally query whether the top specification is worth the extra outlay.

Anyone that’s driven an all-electric car will probably appreciate the instant hit of torque and rapid acceleration from a standing start, and the EQA doesn’t disappoint in this regard – just don’t expect supercar-rivalling sprints off the line. For those seeking a little more sure-footedness on the road, the all-wheel-drive EQA 4MATIC versions will offer some appeal, although the front-wheel drive car feels more nimble and is the lighter option by some 65kg.

Engines, 0-60 acceleration and top speed
All EQA versions have the same 66.5kWh battery capacity, but there are three individual power outputs to choose from. The front-wheel-drive 250 variant produces 187bhp and is capable of 0-62mph in 8.9s, with a top speed limited to 99mph.

Mercedes claims the EQA has a maximum range of 264 miles from a single charge, although this figure drops to around 250-255 miles for versions equipped with the Premium Plus trim level.

Real-world range for all-electric cars can depend on a number of different factors, including weather variations, driving style, vehicle load and even the starting charge of the battery and what optional equipment the car is fitted with. We managed over 200 miles in our EQA test car during pretty chilly weather and found the trip computer to be reassuringly accurate – staying true to the amount of ground we’d actually covered. This will be of particular benefit to anyone with high levels of range anxiety when driving a battery-powered car.

The EQA offers similar range to the Volvo XC40 P8, although it trails the Volkswagen ID.4 which is able to cover in excess of 300 miles in Pro Performance guise before needing its battery topping up.

Charging capability of up to 100kW is decent enough, but the EQA again trails the Volvo XC40 P8 and Ford Mustang Mach-E which offer up 150kW charging power. It should take around 30 minutes to replenish the EQA’s battery from 10-80% using a public rapid charger, and just over 7 hours from empty to full with 11kW three-phase charging.

Insurance
Compared to the combustion-engined GLA model, the EQA will be quite expensive to insure. The EQA 250 cars sit in group 42-44, depending on which trim level you choose, while the GLA range starts from group 27 and only climbs above group 40 for the performance-orientated AMG versions. 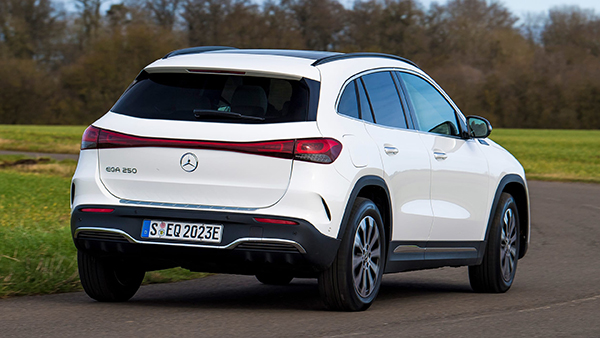 Depreciation
Specific residual value data isn’t yet available for the Mercedes EQA, but it should prove to be a safe bet in terms of depreciation. Its fossil-fuelled GLA sibling still maintains a healthy average of around 55% of its original value after a typical three-year/36,000-mile ownership period, and the larger, all-electric EQC fares even better at closer to 58% retained over the same period.

Rather than design and build a bespoke platform for the all-electric EQA, Mercedes has opted to adapt existing architecture from its GLA small SUV. Space has been created under the vehicle floor to house the electric motor and a battery pack, while the platform has been strengthened to support this extra load. With a kerb weight of well over 2,000kg, the EQA is a heavy car; a full 500kg more than the closely related GLA model.

At first glance, the EQA appears to be a dead ringer for the GLA combustion-engined car. While this is largely true, there are a few tell-tale signs that give the game away and let people know that this is an all-electric model. The EQA has softer lines compared to the rest of the A-Class family, along with a blanked-off grille – the focus being to create a smooth exterior to help reduce unwanted drag and move more cleanly through the air.

Inside, perceived quality remains high with lots of soft-touch materials on regular touchpoints, although in our test car we did notice some lower-grade plastics used elsewhere in the cabin.

Upgrading further to the Premium and Premium Plus packs brings luxury items such as a sliding panoramic glass sunroof, a wireless smartphone charging pad, a head-up display and electrically-adjustable front seats with a memory function. 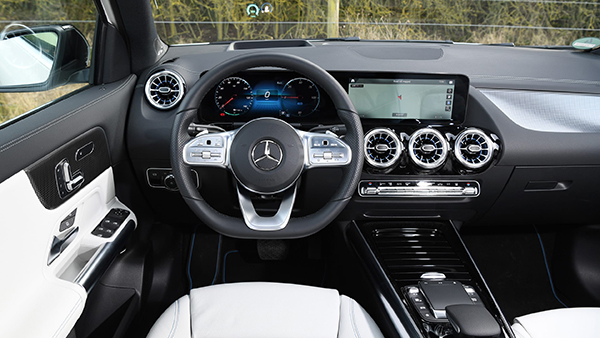 Sat-nav, stereo and infotainment
The EQA includes dual 10.25-inch displays which create a widescreen look across the top of the dash. The intuitive infotainment system is excellent, with sharp graphics and a touchscreen which responds quickly to any inputs.

You have the option to upgrade the sat-nav to feature ‘augmented reality’ which helps with directions by overlaying arrows onto a live feed of the road ahead. We think it’s slightly gimmicky, although some of the Auto Express staff have been more positive about its usefulness – perhaps one to try before you buy.

Android Auto and Apple CarPlay are both standard across the EQA range, along with a nine speaker audio system. The Premium pack adds a further speaker to the mix, while Premium Plus versions receive the top-of-the-range Burmester surround sound system with 12 speakers and a 590-watt total output.

The all-electric Mercedes EQA is a comfortable and refined premium small SUV. On the road very little noise enters the cabin, while the seats offer good levels of support and the regenerative braking system allows for one pedal driving that helps to take the hassle out of navigating around town.

Extra touches such as an electrically-operated tailgate, a reversing camera and heated seats all come as standard and add to the premium feel of the EQA. If you are willing to part with a little more cash, the Premium packs offer a keyless-go function, a 360-degree camera and Mercedes’ MBUX Interior Assistant which uses gesture control for the infotainment system.

Leg room, head room & passenger space
The EQA offers decent interior space with enough room in the back for taller adults to sit behind the front passengers. There is plenty of head and leg room in the rear, too, while anyone sitting in the middle seat shouldn’t feel too short changed in terms of comfort.

Boot
At 340 litres, the EQA’s boot is 95 litres down on the GLA model which might prove to be a sticking point for a growing family. The Ford Mustang Mach-E does a little better with 402 litres of load space, but the Volkswagen ID.4’s 542-litre capacity will be hard to resist for those prioritising practicality.

Towing
Buyers wanting decent towing ability will need to look to the all-wheel-drive EQA 4MATIC versions which have a braked trailer towing capacity of 1,800kg. The front-wheel-drive 250 variant is limited to 750kg.

It’s hard to assess the EQA’s longer-term reliability at this stage, although we think that, given the amount of parts sharing with the GLA and A-Class models, the EQA should prove to be a sound bet. 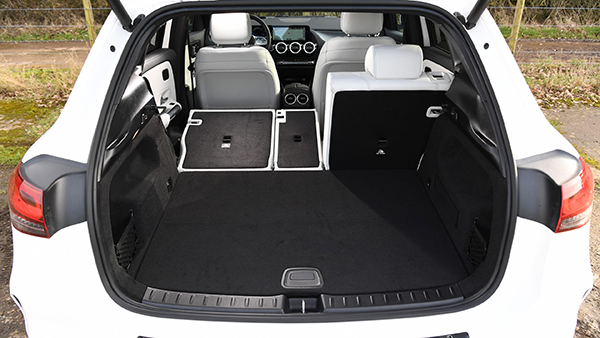 The A-Class finished in 36th place (out of a 75-car list) in our 2020 Driver Power survey, but Mercedes didn’t fare so well as a brand with customer feedback placing the manufacturer in 28th spot out of 30 car makers.

Euro NCAP hasn’t yet put the EQA through its stringent crash test procedures, but buyers can be reassured by the full five-star rating that the bigger EQC achieved in 2019, along with top safety marks for the closely related A-Class hatchback and GLA compact SUV.

Standard safety kit is excellent with Active Brake Assist, Active Speed limit Assist, a Lane Keeping Assist function and a blind spot warning system fitted to all cars. Mercedes also includes its emergency call technology which, in the event of a crash, notifies the rescue services, relaying crucial information such as the vehicle’s exact location and how many people are in the car.

Warranty
Mercedes offers a three-year/unlimited-mileage warranty, the same kind of package supplied with Land Rover and BMW models, but one better than Audi which limits cover to three years and 60,000 miles. The EQA’s battery has a separate eight-year/100,000-mile warranty.

Servicing
The Mercedes ServiceCare plan allows customers to spread the cost of scheduled maintenance over monthly installments. Plans start from around £30 per month.