After the Mercedes-Benz EQC, the next fully-electric vehicles from the German marque are the EQA and EQB. The battery-powered versions of the GLA Class and GLB Class were supposed to hit daylight sooner but the coronavirus pandemic had other plans, prompting the automaker to delay both EVs’ launch dates to this year.

Sadly, the automaker hasn’t given an exact reveal date for at least the EQA, but here’s a sneak preview of the all-electric crossover with minimal camouflage from YouTube’s walkoARTvideos (see the video embedded on top).

As for its boxier brother, CarSpyMedia was able to spot the EQB in a test run at the Nurburgring. You can watch the video above.

Both EV crossovers share many things in terms of design but obviously, the EQB is less sleek than the swoopy EQA. New headlights and taillights, as well as similar closed-off grilles like what you’ll see on the Mercedes EQC are expected in both smaller models. Inside, expect a similar layout as with their conventionally-powered counterparts. 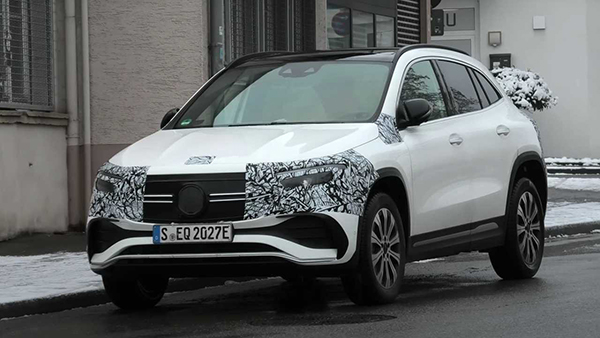 Unknown at this point, however, are the things you’ll find underneath the skin. If it’s any indication, the EQA concept from 2017 came with two motors with a combined output of 268 horsepower (200 kilowatts) and 368 pound-feet (500 Newton-meters) of torque. It promised a range of 249 miles (400 kilometers) from its 60-kWh lithium-ion battery pack. However, that concept was a three-door hatchback and we won’t be surprised if the production model will be entirely different.

The EQB is already confirmed for the U.S. market, while previous reports stated that the EQA delay could stretch to up to nine months from the original plan. A Mercedes-AMG version of the EQA are also speculated to arrive, but let’s not hold our breath on that for now.