The Mercedes EQA is the second EV from Stuttgart, and aims to offer a cheaper way into the brand’s quickly expanding EQ range. Priced at £40,000, the EQA undercuts a lot of the competition – but it needs to make an impact. 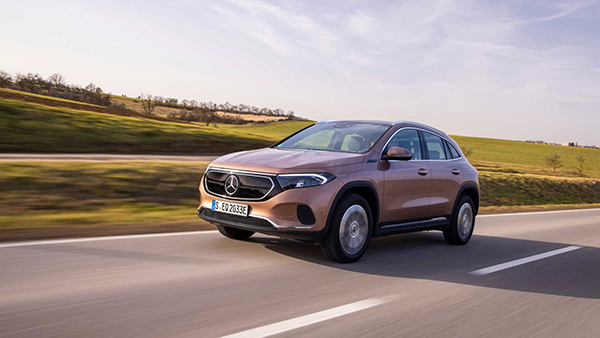 Right now, the EQ range consists of just the EQC, though there’s certainly more on the horizon with the EQE, EQB and slick-looking EQS. That still puts Mercedes behind the curve, and well behind competitors like BMW, Audi and VW, all of whom are already stuck into their EV strategies.

For a thorough look at what the EQ range is going to be, you can read our guide here – otherwise keep reading for our review of the EQA.

D for derivative
Unlike forthcoming cars from the VW Group, Hyundai Motor Group and BMW, the EQA doesn’t sit on a bespoke platform. Instead, it sits on the same chassis as the GLA – though it’s been given some unseen work to accommodate an electric powertrain.

There has been handful of cosmetic changes; the grille is now gone – replaced by shiny gloss plastic and light strips. The back of the car gets a light strip too, ensuring it’s vaguely similar looking to the EQC.

But those expecting something similar to 2017’s Concept EQA will be most disappointed. Where the concept was alien mix of neon blue, silver and A-class proportions, the production car is a GLA with a few new parts. Put the two side by side, and it’s real McDonalds next to homemade McDonalds – the latter being packed with frozen meat, no lettuce, and probably with bread instead of sesame buns. 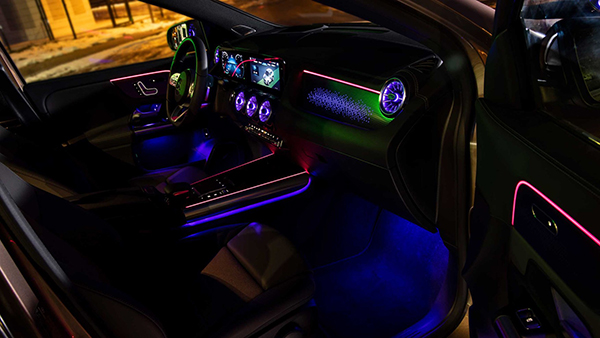 What’s it like inside?
Getting the car in motion is the same as any other compact Mercedes, and it’s made even more familiar by the cabin – which could be in any GLA or A-class. The only real sign you’re in an EQA and not a GLA, is the electric-orientated dials.

There are other features, though; instrument lighting turns momentarily white when boost is active, a horizontally split performance meter replaces the rev-counter and there’s a fire-red low-range warning.

In addition to a full battalion of driving assistants including ACC – which we found fit the EQA’s comfort ethos perfectly – the Mercedes can be had with various massage functions, smartwatch connectivity, mood lighting, bespoke music and even a power nap feature to be relished in a parking area.

Trim levels in the UK are Sport or racy AMG Line, with a pricey Edition 1 spec featuring polarising rose gold accents inside and out along with a rather ritzy cabin treatment. 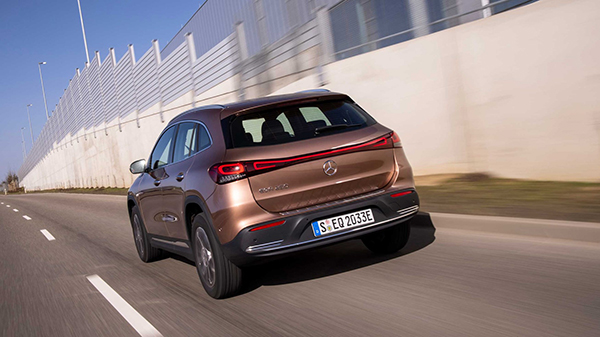 What’s it like to drive?
However, response is a little jumpier off the mark. The EQA pulls like an EV for better or worse, and although there’s not a huge amount of power here – 187bhp and 277lb ft of torque – the Mercedes makes it count up to 30mph. The first few centimetres of the throttle have all the progression of a light switch, and it can expose a ride that’s clearly tuned for comfort.

Get past the EQA’s jerky beginnings, and the ride is well refined. It’s a comfortable machine, complete with a cosseting ride. Does one really need the extra-cost damper adjustment? Not when the car is shod with standard-size wheels and tyres, but it’s a must when you opt for the eye-catching multi-piece 20-inch AMG rims.

There’s almost no noise, too; the main audio source up to 20mph is the subdued pedestrian warning chime which later turns into a subdued hum. Under full throttle, the murmur swells to a discreet growl. Road noise is subdued on the motorway too – and that’s despite this Mercedes not using wing-mounted cameras like other EVs.

It can do the ‘EV thing’ if you want though. While putting the hoof down hard in an EV is sacrilege in the eyes of purists, it’s hard not to enjoy the horizon’s ability to suck this vehicle in with surprising vigour. 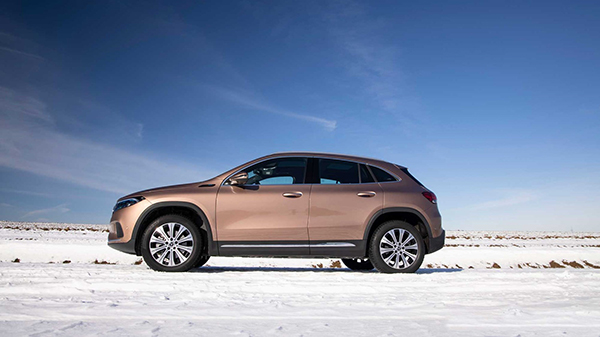 Verdict
Despite being a relatively unambitious above and below the surface, the EQA in 250 guise puts forward a sensible case to join the world of EQ and EV. It lacks the flair and focus of its electric rivals, but it undercuts them anyway; its £40,000 price tag is significantly cheaper than the compared to the iX3’s £60k asking price, or Volvo XC40 Recharge’s £53k one. Add in a competitive range, and it gets easier and easier to ignore the Mercedes’ dull looks.

The EQA may not be the most exciting EV on the market – or in the EQ range for that matter – but it’s exactly what Mercedes needs in 2021.