Almost half a year after it was officially revealed as Mercedes-Benz’s smallest and most affordable electric vehicle, the EQA has been subjected to the moose test.

In the hands of Km77, the 2021 Mercedes-Benz EQA tried to avoid the imaginary obstacle in the middle of the road and return in its initial lane at 76 kph (47 mph).

However, it hit a cone, forcing the Spanish YouTube channel to repeat the evasive maneuver, noting at the same time that the vehicle does not feel nimble, yet the electronic stability program kicks in efficiently.

Other attempts sent the premium subcompact electric crossover, which shares quite a few features with the ICE-powered GLA, flying into the cones. In fact, the team had to lower the entry speed to 74 kph (46 mph) to thread through the course.

At normal driving speeds, the slalom test posed no threat to the EQA, as there wasn’t much body roll, according to Km77, yet since it is heavy, the steering feels sluggish. Moreover, trying to increase the speed made it understeer and forced the ESP to kick in. 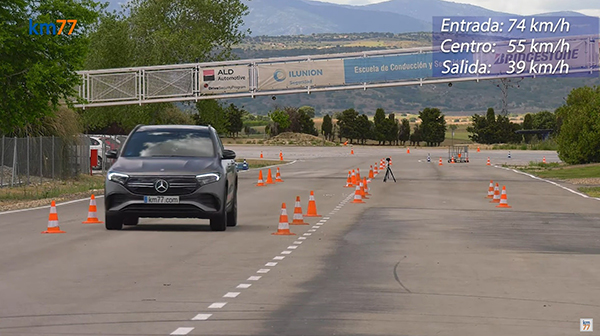 The moose test result puts it in the same zone as the 2021 Mercedes-Benz S-Class and new Fiat 500e electric supermini.

It could have been a lot worse, though, because the Volkswagen Golf Mk8 did it at 69 kph (43 mph), 8 kph (5 mph) less than the minimum required entry speed, and its premium sibling from Audi, the new A3 Sportback, did it at 72 kph (45 mph).