This Mercedes-Benz 600 SL is a one-of-a-kind model. The German V12-engined roadster, painted in a color reminiscent of BMW, is up for auction with just 2461 km (1529 miles) on the British Historics website. Considered the car collection par excellence, Brunei’s royal family car fleet was created between 1980 and the early 2000s.

The collection was gathered by the Sultan and his brother Prince Jefri, and is the starting point of many myths. It is rumored to comprise between 3,000 and 7,000 cars and motorcycles, at an estimated total value of several billion euros.

Most of the vehicles are still in Brunei today. However, some of them end up in other parts of the world, such as this Mercedes 600 SL.

The car will be auctioned on May 21 at Historics Auctioneers in the UK. The Roadster was painted at the factory in BMW’s “Violet Blue Metallic” color and, combined with the black leather interior, looks truly unique. In addition, the car has run very little over the last 29 years. The 2461 km (1529 miles) on the odometer correspond to an annual mileage of fewer than 90 km (49 miles). 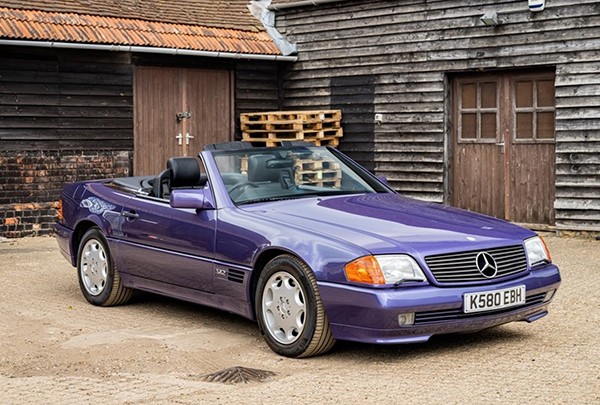 After 28 years in the royal collection, the right-hand drive 600 SL was imported to the UK in 2021. Visually, the 600 SL, which is offered with a matching hardtop, makes an excellent impression. The paintwork is not faded and the interior is also in excellent condition. Both the hardtop, which makes the car a convertible, and the alloy wheels are also original.

Under the hood of the roadster is the 6.0-liter V12 engine, which delivers 394 hp and a maximum torque of 570 Nm (420 lb-ft) to the rear wheels via a four-speed automatic transmission. Top speed is electronically limited to 250 kph (155 mph). However, the R 129, the generation of which it is a part of, is not a sports car, but rather a luxury cruiser.

Of course, the “Violet Blue Metallic” exterior color may not be to everyone’s liking, but the extremely low mileage combined with the royal background should make this 600 SL interesting to collectors. Experts have estimated the price at around £45,000 ($55.529) to £60,000 ($74.039).