The roof is down, the windows and wind deflector are up. It’s a breezy, coastal 58 degrees outside, but inside, the Airscarf built into the seats is breathing warm air on our necks, like a cozy dog perched behind you on the sofa. At 75 mph, a conversation is easily had, while the adaptive suspension delivers a refined and imminently comfortable ride. By the end of the day, we’ve gone from Newport Beach to Palm Springs in comfort and style – basically, a quintessential journey and experience for a Mercedes SL. 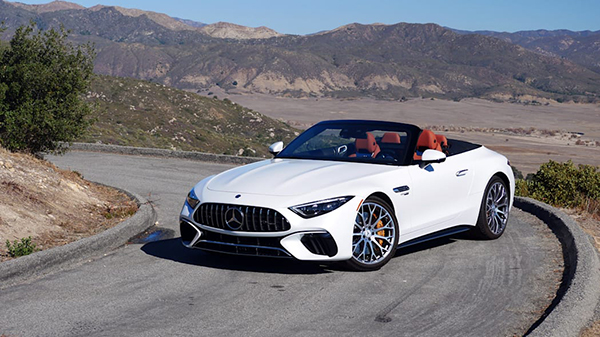 Except that this is the 2022 Mercedes-AMG SL 55 and SL 63. There is no longer a “regular” model, one with a 0 at the end of the number. Not only will the SL exclusively be offered in AMG variants, it was independently developed in Affalterbach by AMG. That makes it more akin to the original SL, aka the Gullwing, which reached production nearly 70 years ago after originally being engineered to race at Le Mans and elsewhere. This one was not, but its AMG origin and the expectations for those letters mean that the new SL needs to satisfy much stronger demands than a grand touring jaunt from ocean to desert.

To that end, it’s underpinned by a completely new architecture featuring a composite aluminum structure integrated in places with magnesium, fiber composites and steel. The goal was to keep weight low and increase rigidity – indeed, the 2022 SL has a stiffer structure than both the outgoing model and the GT. A major weight reduction also came by reintroducing a soft top to the SL after two generations and 20 years with retractable hardtops. This not only trims a whopping 46 pounds from the car, it lowers the center of gravity with the top up and fixes the inherent dynamic issue with the top down of suddenly having that weighty roof origamied beyond the rear axle.

The suspension is newly developed for the SL as well, and is the first time a series production Mercedes is equipped with a five-link front suspension. Five links up front is actually a rarity throughout the industry, with the vaunted new Porsche GT3 among those so fitted. The SL uniquely has all five links arranged entirely within the wheel rim, which AMG says significantly improves kinematics, but we were unfortunately unable to dig deeper into exactly how. There are five links at the rear as well, which is less unusual.

Damping differs by model. The SL 55 gets the latest generation of AMG Ride Control adjustable damping with two pressure relief valves per damper. One controls rebound, the other compression, allowing both to be controlled independently of each other. This makes it possible to maximize comfort and increase road holding. 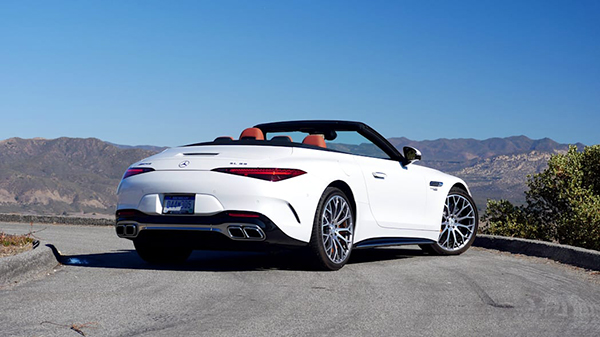 We were wildly impressed. After first experiencing the cushy highway ride, a blast through the winding roads near Palomar Mountain showed that this isn’t just a grand touring, country club SL. The suspension in Sport+ does indeed firm up to stay exceptionally flat through corners, but not so much that it becomes tiresome or upsets the chassis over bumps. Grip is exceptional, aided by Michelin Pilot Sports and standard all-wheel drive (this is the first SL to offer AWD at all). The SL 55 is balanced and doesn’t feel as large as the previous SL, or the SLS that was more Batmobile than roadster. And although it’s probably just a matter of perception due to the larger cabin, you don’t feel as entombed and sunken behind the wheel as you do in the GT. It all results in a car that feels more approachable and lithe, with light-if-feelsome steering that benefits from a relatively minor 2.5-degrees of standard rear-wheel steering. Though you certainly notice the SL’s consequent agility, the RWS doesn’t draw attention to itself in the same physics-defying, Disney ride sensation of larger cars with greater degrees of rear wheel toe angle like the Mercedes EQS.

After spending the morning behind the wheel of the SL 55, it was hard to imagine how the SL 63 could really top it in the afternoon. Turns out it really doesn’t. Besides the engine, which we’ll address in a moment, the SL 63 differs by effectively including as standard the SL 55’s optional AMG Dynamic Plus package. This lowers the suspension by 10 mm and adds the newly developed, hydraulic AMG Active Control Suspension. This has different adaptive dampers, which are connected together in a complicated web of hydraulics (the compression stage of the front left damper is connected to the rebound stage of the right damper, for instance), and active hydraulic elements that replace the SL 55’s conventional mechanical anti-roll bars. This, theoretically, reduces roll even further, improves turn-in precision and allows “drivers and passengers (to) experience a significantly more comfortable driving experience.”

Not in our experience. Despite sharing the same wheel size and tire type, plus driving on comparable roads and surfaces, the SL 63 produced far more “noise” through the steering wheel, with extra vibration and occasional harshness felt through the front axle. It felt like a notably less refined car, and if there was a dynamic advantage to be found, we certainly couldn’t notice it at the not-exactly-relaxed speeds we were driving. If we had only driven the 63, perhaps we wouldn’t have a gripe, but we unquestionably preferred driving the SL 55.

It’s a similar story under the hood. Both SLs feature AMG’s familiar 4.0-liter twin-turbo V8 that receives a new oil pan, repositioned intercoolers, active crankcase ventilation and reworked exhaust for service in the new SL. It produces 469 horsepower and 516 pound-feet of torque in the SL 55, while higher boost pressure, greater airflow and modified software results in the SL 63 version producing 577 hp and 590 lb-ft of torque. It hits 60 mph in 3.5 seconds, versus 3.8 in the 55, and it honestly feels like a bigger difference than that. You absolutely notice the extra power, finding yourself going too fast sooner and with greater frequency. 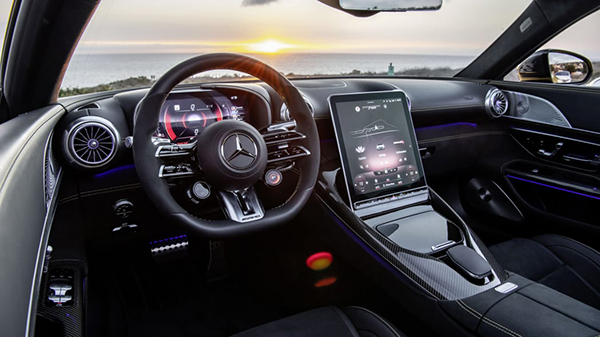 Basically, like other AMG 63s, it just seems like overkill. The SL 55 is enough of a goon in acceleration and character. It does, after all, have the same engine with a common, buttery-smooth power delivery and progressive, deep exhaust rumble. There’s some crackling in overrun in the Sport modes, but it’s not excessive. It doesn’t rabble rabble rabble every time you lift off – it’s more grown up than that – but it still belts out a satisfying bwap with upshifts.

Visual differences between the two are minimal and, if you no-cost delete the darkened trim pieces of the 63’s Night package, virtually nonexistent apart from the badging and brake caliper color (red 55, yellow 63, gold for the optional carbon ceramics available on both). We can’t say that’s really a bad thing as slapping on a bunch of go-fast, carbon bits would only ruin what is a clean and beautiful design. It’s been a very long time since we could describe a Mercedes SL as such.

A big reason the design manages to be so tidy and clean, besides avoiding the swollen butt needed to swallow a retractable hardtop, are the innovative active aerodynamics in both cars. Vertical louvers behind the lower grille and horizontal louvers behind the star-stuffed Panamerica grille stay closed in most instances to reduce drag and direct air towards the underbody to further reduce lift. At the rear, there’s a subtle four-channel diffuser and an active rear spoiler that automatically adjusts to five angles based on speed in order to achieve the best balance of drag/efficiency and stability depending on speed and driving scenario. The steepest angle obviously achieves the greatest downforce and therefore allows for the best possible road holding, and can be individually selected.

Additional downforce can be achieved with the Aerodynamics package, which pops the spoiler up sooner and achieves a steeper max angle. It also has an enlarged rear diffuser and larger “flics” on the bumpers, but the big ticket item can’t really be seen. First seen on the AMG GTR, the “active aerodynamic profile” is a carbon piece several inches from the bumper’s leading edge that automatically extends downward at either 50 or 62 mph depending on drive mode. It utilizes the so-called “Venturi effect” to basically suck the car onto the road and reduce front-axle lift by as much as 110 pounds at 155 mph. Supposedly, this can be felt in the steering even at lower speeds, though we did not get a chance to sample an SL with this package. 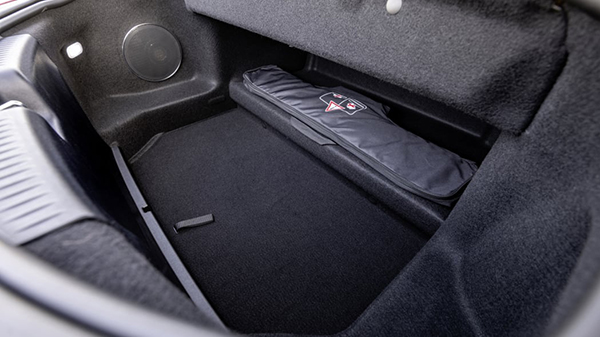 The interior isn’t particularly groundbreaking, with feature content and a design consistent with the rest of the Mercedes lineup, plus the enhanced MBUX interface shared with the new S-Class. That means it shares the portrait-oriented touchscreen, but adds a necessary wrinkle in the form of an articulated base that can angle the screen as needed from 12 to 32 degrees to avoid beaming the sun into your eyes, or, as we discovered, having the infotainment system replaced by a portrait reflection of your passenger.

And speaking of passengers, you can now bring more of them with you. Sort of … they’ll probably be dogs, and small ones at that. Or people who really need a ride who are quite short and don’t mind dealing with a back seat that’s pretty much at an acute angle. Oh, and those up front will similarly have to be very short for even the shorties in back to fit. So why bother? Well, even if not particularly suited for human transport, the extra interior space for small bags or dogs really does make the SL a more livable car on a daily basis, and perhaps more importantly, weekend excursions. It certainly doesn’t take away from the car’s dynamic talents, and let’s not forget that the Porsche 911 has a similarly vestigial back seat.

The extra seats also provide a point of differentiation with the Mercedes-AMG GT, though the fact remains that the two cars remain awfully similar. We therefore asked the inevitable question: What does the new SL mean for the GT? The answer resides in what’s coming for the next-generation GT, which will be a more track-ready, hardcore sports car. Ironically, it’ll be less of a GT. In the meantime, at least the current GT can hang its hat on still offering the hardtop coupe, including the extreme Black Series.

Pricing has not been announced, but it should definitely be north of the last SL 550 ($116,755) and likely south of the more powerful GT Roadster ($131,750). The SL 63 has more power than even the GT C Roadster, so it wouldn’t be surprising to see it come in higher than that car’s $166,150 starting point. If so, that would be awfully steep for a car we liked less than the supposedly lesser SL 55. It was sufficiently thrilling to satisfy its newfound AMG lineage and more livable to satisfy the SL’s grand-touring expectations.