Britney Spears and boyfriend Sam Asghari are on cloud 9 after being granted a motion allowing the singer to handpick her own attorney in her quest to dissolve a 13-year conservatorship. Los Angeles County Superior Court Judge Brenda Penny approved the resignation of Britney’s lawyer of 13 years, Sam Ingham, and allowed her to choose his replacement, former federal prosecutor Mathew Rosengart, along with a team of attorneys at Rosengart’s firm. Spears is demanding her father Jamie face charges and be investigated for his handling of her conservatorship, claiming, “this conservatorship has allowed my dad to ruin my life.”

Since 2008, Spears has been under double conservatorship: one over her person, which decides who she dates, if she’s allowed to drive, and what kind of purchases she can make (including trivial stuff like ordering takeaway), and one over her business. The conservatorship came to be after a very public meltdown, when her father stepped in and asked a judge to sign off on it.

Spears is currently fighting the conservatorship, asking for her father to be removed from it, and speaking for the first time of the kind of abuse she’s had to endure along the years. This includes being denied one of life’s simplest pleasures, that of going out for a drive on her own or with her boyfriend, she confirmed in one of her most recent court hearings. 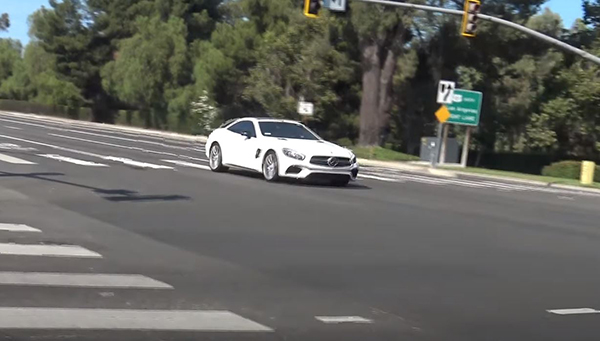 On Sunday, she got that wish… sort of. She was allowed to take her white Mercedes-AMG SL 63 for a drive, and she had boyfriend Sam Asghari in the passenger seat. Britney drove herself, the Daily Mail confirms. This might seem like the silliest accomplishment, but for a 39-year-old who has been denied that right for years, it must feel like the biggest.

As the video at the bottom of the page shows, Britney wasn’t without her security detail. A bodyguard drove right behind her, in her white Mercedes-AMG G 63. But driving around with a tail is better than not being allowed to drive at all.

The outing also confirms what Britney told the court about how she was denied the right to buy a new car, despite the fact that she did not stop working until January 2019, when she went on an indefinite hiatus in Las Vegas. She’s worth $60 million (which is a very low amount considering she remains the best-selling female artist in the world) and she’s driving older models of the SL 63 or the G 63. No other celebrity half her worth would be caught dead in a car older than one year, unless it’s a classic.