Haven’t done a car Photochop in a long time so because it’s a dull rainy day today, I thought I would have a go at giving the beautiful new Mercedes-AMG SL a makeover in the style of the Maybach Vision Cabriolet. Came out pretty nice I thought – and a distinct different proposition. So here’s my Maybach SLV E-Performance, finished in a suitable thomas letsgo blue colour of course Gold star if anyone can name all of the donor cars that went into the mashup. 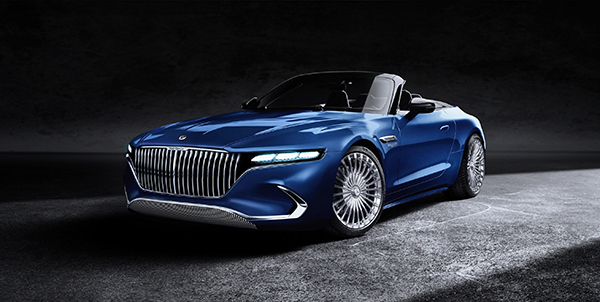 Founded in 1909, Maybach was acquired in 1960 by Daimler-Benz even though car production had to be halted two decades earlier due to World War II. The ultra-luxury automaker returned to form in 1997 with a concept that previewed the regular-wheelbase 57 and the longer 62.

But guess what? Neither sold well, and Daimler had to accept that even Rolls-Royce and Bentley had the upper hand in the ultra-luxury segment.

The brand went under in December 2012 after selling a little more than 3,000 vehicles since the year 2000 at an estimated loss of €330,000 ($381,305 at current exchange rates) per unit. Two years later, Daimler decided to reinvent Maybach into a sub-brand of the Three-Pointed Star from Stuttgart.

On this occasion, the plan worked perfectly for the German automaker. Maybach versions of the S-Class, G-Class, and GLS-Class have sold and continue to sell pretty well, and the ultra-luxury treatment will soon extend to the EQS SUV all-electric crossover utility vehicle. The question is, will the R232 SL-Class get this extremely coveted badge in the future?

The answer to that question is obviously no because Maybach is exclusively interested in full-size luxobarges. Even the Vision Mercedes-Maybach 6 series of concepts are tremendously long at 5,700 millimeters while the R232 measures 4,705 mm from the front spoiler to the diffuser.

It’s also worth underlining that Merc had a very different vision for this generation of the Sport Leicht because the “-Benz” suffix has been dropped for the “-AMG” sub-brand. That’s because the mad professors in Affalterbach have designed the R232 to be much sportier than its forerunner, and sportiness clearly doesn’t blend with Maybach’s character.

Penned by pixel wizard Phil Calam, this design study will have to make do for anyone who was looking forward to a Maybach-branded SL.