Downhearted that Mercedes doesn’t offer the brand-new SL as a coupe? Fret not because the R232 will gain a hard-top sibling in due time with the next-generation GT. Until then, X-Tomi Design has Photoshopped a fixed metal roof on the SL to make the waiting that much more bearable. 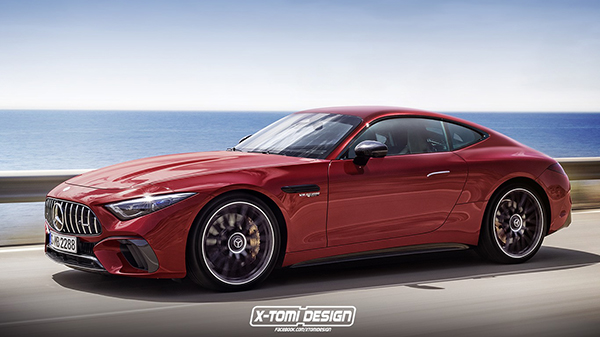 Designed by Rudolf Uhlenhaut, the original SL carries the W194 codename and features gullwing doors that would be adopted by the W198 we refer to as the Gullwing. The series-production Mercedes 300 SL numbers merely 1,400 coupes and 1,858 roadsters, which makes it a blue-chip collectible.

The subsequent W113 Pagoda was offered with a soft top that could be complemented by a removable hardtop. Come 1971, the Stuttgart-based automaker decided to split the third generation into two models: the R107 soft-top SL and C107 fixed-top SLC. Penned by legendary designer Bruno Sacco and engineer Johann Tomforde, the R129 switched back to a fabric roof with a detachable hardtop. The R230 transitioned to a vario-roof setup with a folding time of 16 seconds, and the R231 followed the same recipe.

It took Mercedes quite a long time to embrace the canvas top once again, but it was utmost necessary because a retractable hardtop for the R231 and two body styles for the GT translated to dwindling sales for the Sport Leicht. What’s more, the electric fabric top of the R232 weighs 46 pounds (21 kilograms) less than the vario-roof design of the previous-generation SL.

Don’t, however, fool yourself into thinking that SL still means Sport Leicht in the literal sense. The addition of 4Matic+ all-wheel drive makes the R232 quite a hefty car that weighs 1,950 kilograms (4,299 pounds) for the 55 variant or 1,970 kilograms (4,343 pounds) for the more potent 63 series.

Be that as it may, it’s tremendously fast for a grand tourer in disguise. Merc quotes 3.6 seconds to 100 kilometers per hour (62 miles per hour) for the range-topping SL 63, which makes it quicker than the previous SL 65.