Purists might easily claim that some classic models are way too iconic to allow even the tiniest changes. So, perhaps it would be “wiser” to modulate everything since it is always going to be controversial. 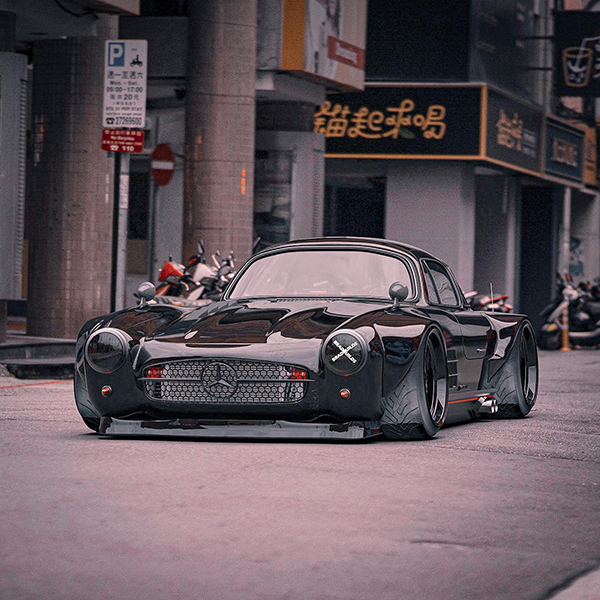 Take the mid-1950s Mercedes-Benz 300 SL Gullwing two-seat sports car for example. Anything other than a fully original example will not get the seal of approval. And as far as the coupe is concerned that is even harder than its roadster counterpart because fewer have been originally produced.

Alas, there is one person out there who does not want an original. Nor does he need a replica. Instead, Brad, the virtual artist behind the bradbuilds account on social media, is again happily back to digital creation duties. So, after another lengthy hiatus, he again celebrates the CGI projects reel with a quirky JDM idea.

Wait, you are going to ask what is up with the Japanese inspiration when dealing with one of the most European automotive creations in the world. Well, as it turns out, it is not just the background that sets the JDM tone. Instead, the 300 SL is one of the most outrageous Gullwings ever imagined.

Starting with the murdered-out exterior vibes. Those bode well for the very cool “X-signature” treatment bestowed upon the left headlight. And also for the entirety of the slammed, widebody restomod design. According to the author, the idea was to give it a full Hot Rod treatment. Well, he succeeded, if you ask us.

Alas, that still does not explain the JDM connections. And the fact it dwells in a decidedly Japanese-style urban environment. Thus, we turn towards the hints located in the hashtags. As per the pixel master’s imagination, this 300 SL does not feature the 3.0-liter M198 straight-six classic engine anymore. Instead, under the virtual hood resides an RB26DETT engine from Nissan’s ubiquitous Skyline GT-R series!