About half an hour’s drive from the provincial capital of Alicante, you’ll arrive in Elche, the city that Tamarit Motorcycles’ aftermarket connoisseurs call home. Only six years have passed since the Spanish enterprise opened its doors for the first time, though the sheer length of their portfolio might have you believe that they’ve been around for at least twice as long.

It all started when a leather expert named Quique had been tasked with upholstering a one-off saddle, which proved to be a lot more intriguing than fabricating footwear. Slowly but surely, his focus began shifting toward motorcycle customization, and he was soon joined by Matías – a skillful craftsman who shared the same interest in two-wheeled artwork.

In 2015, they joined forces to pursue their common ambition, thus establishing what would later become one of Europe’s most prominent workshops. As time went by, the Tamarit crew has been involved in a myriad of Triumph-oriented projects, the 100th of which is currently in the making.

Oh, and don’t you even get me started on their enormous catalog of bolt-on hardware. The vast majority of components used on Tamarit’s builds can be purchased from the company’s official website, so that’s the first place you ought to be heading when your stock Triumph is in need of some custom flair.

The bike we’re about to examine – dubbed “Gullwing X” – draws inspiration from the legendary Mercedes-Benz 300 SL. Between 1954 and 1957, a mere 1,400 coupe variants of this beloved Merc have been assembled in Stuttgart, and we dare say that it’s the sexiest car produced on German soil during the fifties!

Nowadays, it’s not uncommon to see a tidy 300 SL changing hands for over $1 million at auction, but there are plenty of collectors who would throw even more cash at this glamorous icon. Tamarit’s two-wheeled tribute aims to encapsulate the Super Leicht spirit in a series of nine homogeneous builds, three of which have already been sold for €39,900 ($44,920) a pop. 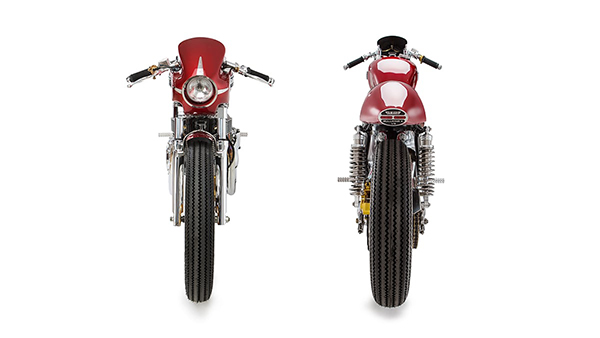 The inhalers are mated to fresh velocity stacks, but these can be swapped with a pair of K&N air filters, depending on each customer’s preference. By rounding things out with a free-flowing exhaust, the moto doctors were able to unlock as much as 98 hp at the crank, which is a significant jump from the standard Thruxton’s 69 ponies.

As far as the bodywork goes, you will find a seamless monocoque structure that merges the fuel tank and tail into a single unit. When necessary, this module can be lifted via hydraulic mechanisms to reveal the electrical componentry stored underneath. At the front end, the Gullwing X comes equipped with a minute fender, as well as a handsome fairing that nods to the SL’s classy contours.

Moving on to the cockpit, we’re greeted by clip-on handlebars, aftermarket levers, and a shiny triple clamp with built-in Motogadget instrumentation. The donor’s original forks were refurbished from head to toe, while the rear shock absorbers have been deleted to make way for high-grade Hagon alternatives.

Tamarit’s experts are perfectly aware that a project of this magnitude demands some gorgeous footgear, so they’ve topped it all off with Kineo hoops, Galfer brake rotors, and top-shelf Beringer calipers. Finally, the Gullwing X rides on a set of Victory Classic T/T tires that look as if they prioritize form over function, but we’ll refrain from commenting on the crew’s choice of rubber.